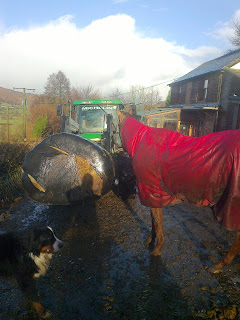 Living on he slopes of the Bonsai Mountain you would think flooding would not be a concern but the sheer volume of water pouring from the sky and off the hill has led to several problems that needed solving today. The workshop flooded, Spotty alerted us to this by carrying his bed into the kitchen, there was nothing we could do about that water, the roof is the problem and given my capacity for falling from heights crawling over the annex roof is banned. Probably just as well as had I self harmed I would not have been around to launch the lifeboat. 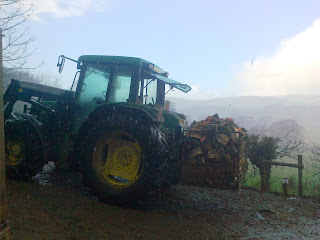 The weather gave us four seasons in one hour, sunshine when the horses take away was delivered, then torrential rain, hail, snow and gale force winds sent us diving for cover (coffee and cake) until the squall passed and we could stow away the logs. As the naughty ponies had wrecked a bale of hay stored for bedding I took the chance that the sun would still shine while I carried fresh bedding to the soggy. Pam and her piglets were fine, Bridget and her brood were treading water and firing emergency flares. No choice but to launch the life boat and rescue the wet porkers who gratefully followed the blue bucket of allure to the relative safety of the small pig pen. Back on dry land their attention turned to more important matters like food and that gave yours truly and the fencing Jedi the time to cobble up a sort of fence, as in it sort of looks like a fence if you squint from 100 yards away. As the Jedi master said, its not a show fence, its a work in progress. Hopefully the work in progress will keep the pork confused/contained until Wednesday when three more go to pig sty's new, and next Sunday when two more give their total commitment to bacon and sausage.
Posted by Tony at 22:34