Having made the impossible reverse look easy

yours truly and Stan were set to

namely to take these three little piggies home. They have pet status and are clearly NOT SAUSAGES.

Pete here wasnt being rude he had a stroke and his tongue is always out. Pete, Pete Tongue... never mind.

they did what pigs do

Having advised the delivery company of the perils that lurk along our lane and the restricted access via the gateway to the world it did take a while to stop laughing at the unfortunate soul tasked with delivering our new bathroom in a box to HQ as he got stuck and had to be helped out of his predicament by yours truly.

Unfortunately this led to the potential bathroom being dumped by the gate on a rather large pallet.

Fortunately yours truly had a brain wave to use said pallet as a sledge to drag it home. In a sudden flash of unusual common sense yours truly pondered the merit of this after 10 feet and checked to see what potential for damage there was. Lots as the bath was not on the pallet at all merely resting between what were to be the sledge runners and had I gone any further the bottom might not have fallen out of my world but would surely have fallen out of the bath.

Problem solved and safely at the cottage the bath sat patiently in the yard to be fitted in the requisite room.

Seek and ye shall find

The many hours spent looking for a motorbike on eBay has borne fruit......not through eBay but by rummaging around in a friends garage where under a dust sheet this was found. Its my bike now.
Posted by Tony at 13:31 0 comments

You should move that

but the good news is is that all the pups are still alive and well, three are getting very chubby, one is being fed every 3 hours by syringe still but we are hopeful she will make it.

Totally ignoring the advice from Big Rob the mighty osteopath who has replaced Agnes, yours truly decided that sitting on his jacksy watching daytime TV was not as much fun as waiving all health and safety rules and finally fitting the guttering to the stables some 7 years after they were built. As ever the lack of proper stuff meant that Stan had to be used as a step at one end which was fine provided nothing fell off the roof and through the rear window. I mean, how likely is that to happen. A million to one chance.

the gutter was fixed and all was well, right up to the point the small god of gravity got fed up with my success and

a new drama was created.

but he chances of her making it to this size does

seem at this stage a remote

possibility.
Posted by Tony at 13:48 0 comments

When its this deep

and this much you know yours truly is not going to be able to clear the area of horse doings with a shovel and wheelbarrow so as its the new year we are off to a fresh start by having a massive JCB come up and clear the area.

This cunning plan was almost ruined when a tree which hithertoo had done nothing to draw attention to itself other than be covered in lovely yellow blossom annually decided to fall over and block the lane.

Which is why yours truly was out in his boxers chainsawing the naughty timber into manageable chunks to clear the way for the way clearer.

Which arrived and did a grand job.

Moving all the doings to the a better place where we will step in it less.

as we are feeding Riley the smallest puppy ever every 3 hours a the moment.
Posted by Tony at 12:31 0 comments

Ripley had other ideas and at 3am , some 7 hours before pup departure time Rippers dropped 4 healthy pups onto the mat.

One was absolutely minute, less than a third the size and weight of the other 3 who are monsters.

Not that Ripley minded.

So, here we go again

because someone has to!
Posted by Tony at 12:12 0 comments

The post Christmas ride took place in excellent weather , an interesting route with the first climb being this one, to the top of Stanner.

This involved a lengthy winding route up

and for some involved as much pushing as riding.

Has to be said all of us were feeling the effects of Christmas and lack of proper exercise. 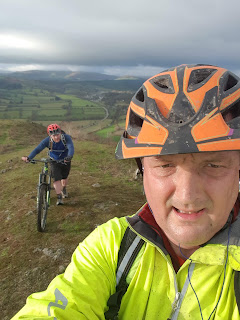 One of us particular was feeling the burn

as it was in reality his first ride on his new toy. What he said at this point cannot be repeated in company and involved putting the bike somewhere dark and entirely unsuitable for bikes. We managed to persuade him to carry on a shortened route

via Chris's Cycles for mince pies. 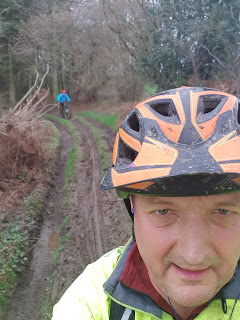 Which cheered me up no end but didn't improve his speed. 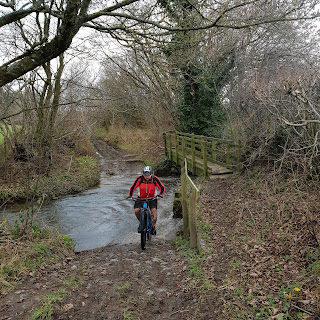 The final obstacle was the river crossing which we managed without drowning or recourse to the bridge.

That time had arrived, the one where we get to up the drawbridge and spend days at Rock HQ enjoying life. 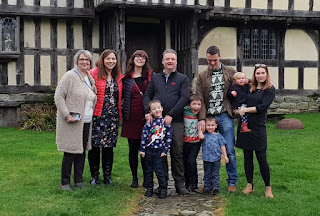 Just before that happened we did go to our favourite place to eat and took the clan where children and grandchildren, parents, grandparents and super grandmas had a lovely time. 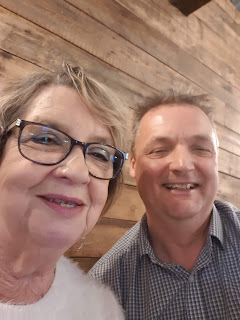 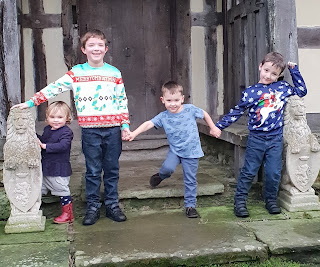 You have no idea how long this picture took to take!

The Christmas day meal....less is more :)

I've waited 43 years to own this toy.

Even dogs can play twister.