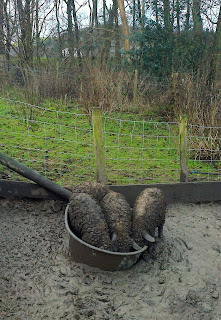 The morning came round surprisingly quickly, something to do with staying up late to mark the passage of time, and for once it wasn't raining. The short dry spell, for it rained as soon as we got Will.I.am tacked up for a new years ride (it took place but was short due to awkward gate catches, broken stirrups and a long walk back) gave me a chance to take stock of the devastation wrought by millions of gallons of falling H20. We are in a sorry state, mud is an occupational hazard but we have not dried out this year. The piglets look like they have had enough and are taking to the life raft. Two sections of the kennel block/goat house/maternity suite have had to be abandoned to all but aquatic life forms, as has one of the goat houses, a steady stream of water in and out an indicator of the high water table. Stalag 14 has been abandoned as its more like a swimming pool than a chicken run, the chickens are currently dry in the greenhouse with two ducks who also complained abut the water features in their pen. The big pig pen has been abandoned as any pigs in it would surely drown, the mud at one end is over knee deep, wellingtons are useless, mine especially with the assorted size holes that filter out the mud but allow the water easy access. In all we are deficit a few living quarters thanks to the deluge. We need a bit of a dry spell to say the least! 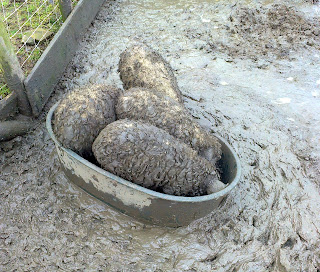 On a sad note, yesterday Kayleigh lost her fight for survival and passed away to celestial pastures. She had got weaker over the last week, everything seemed to be improving for a while, she even stood up, but the poor old girl died in her sleep yesterday evening next to her family. Perhaps if she had been a young goat a ton bale falling on her head might not have had such an impact (pun intended) but she was nearly 10 years old and a bit frail anyway so that sort of trauma was likely to be fatal.
Posted by Tony at 23:44

sending our love to kayleigh, she did live a great life! personally think she decided that goat heaven was drier...:) happy new year to the rest of the critters at the rock.

Mud, glorious mud - not!
Like you, we have had more than enough of the wet stuff but of course, 2013 is going to be almost entirely, dry, sunny and warm, with just enough occasional light rain falling during the night to keep things fresh and the dust down.
Methinks slugs will be a major problem this year, irrespective of weather. They had such a bumper 2012 that egg production will have been high so any ideas on getting rid of the little blighters.....! I'm going to try biological controls this year, and early in an attempt to reduce their numbers before they get going. We'll see!

No more problems for Keyleigh and she didn't die alone.....you did her proud, a good life. We here in Orkney have seen more rainfall then ever and we also wish it would give us a break.....especially when your roof leaks and the indoor water features multiply! Stay healthy and hope this year is a good one for us all. Love Claire.