How did that happen?

Not sure quite how this happened but the apprentice is now 8 years old!!!

8 years since he arrived at Rock HQ (on a day that England beat France in the 6 nations I remember it well) and here he is larger than life tooling himself up for a Nerf gun fight.

So a birthday t was in order

and RRMk2 likes to be centre of attention, as a gnome

then as an alien.

Ive not had time to turn around yet alone paint anything but this cold turkey doesn't mean I'm no longer a nerd and two days ago I gave into the call of the brush and immediately made a huge mess.

Progress was slow, not as slow as bathroom slow but slow

but soon they will be finished to a good enough for a nerd standard.
Posted by Tony at 13:28 0 comments

Big dogs have a habit of making themselves small when it suits them, here is Reuben squashed into someone elses bed.

The mighty pups have now gone on to their new homes, here is Magnus with Lynne who has a Berner off us called Monty 4 years ago.

Ripley was happy to see the back of him as they are mighty big now.

Next to go was Marshall who went to our great friends Nick and Wanda who never had a Berner off us but we are related as our Reuben was brother to their Morgan. (hope Ive got that right this time, Im sure it was Morgan not Oliver, either way they lost these two fabulous dogs last year so now have this great lump to contend with) 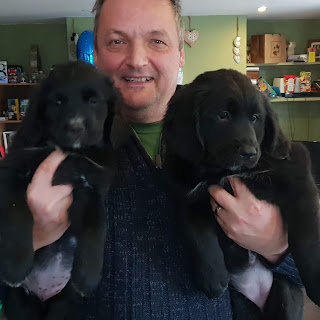 That left us with the two girls.

One of whom, Bailey, left us to got and live with Sarah and Lawrence.

Leaving Riley, the 100gramme miracle pup who against all odds survived and is now resident at Rock HQ. Who would have guessed that!
Posted by Tony at 13:25 0 comments

The days are getting much longer

so its light during morning rounds

was indeed a good one and made you think of the joys of life and the wonders of nature, 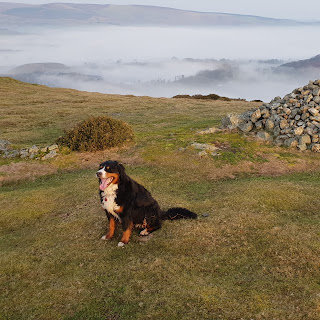 an inversion. Clouds on the ground type thing.

So much time was spent

looking out over the shire and

listening to the Skylark who was singing his little heart out.

was there to start a day

I am in fact making progress

the days just blur into one

and as usual where you make progress in one area you fall behind in others.

But at least the end is nigh

but on unpacking the new toilet there was a bit of a flaw, never mind a new one was dispatched and arrived the next day.

Dropped, literally, off in the oracle's outbuilding

this one too had a bit of a defect caused by careless handling.

Luckily the old one was still serviceable

giving me something to sit on while

and if ever an example of the camera never lies is wrong then this pic is it as it doesnt look anywhere near as good in real life.
Posted by Tony at 13:09 0 comments

This was my view at lunch time but work and good sense meant I was not allowed to participate.

Back home things looked like someone had already been on the gin as this poor lad was in the ditch. The Amazon driver was Romanian and had only been working a week after arriving in the UK 4 weeks ago. His English was as good as my Romanian but I did understand Plis Halp Mi.

So yours truly dragged him out of the ditch with my plucky 4x4 but his relief was shortlived a the vans steering rack had broken which probably explained why he was in the ditch and not heading back to Wolverhampton.

So began an epic recovery which included pie and chips 7 hours waiting an incredible ballet of vehicles along a single track road (recovery truck facing wrong way my car between it and target vehicle and you get the idea) and a united nations of perplexed humanity trying to solve it (the recovery driver was Ugandan) Finally they left our world and headed back to civilisation. The most urgent delivery? A 59p magnet for the apprentice to complete his homework.
Posted by Tony at 12:49 0 comments