With all that's going on the fact that 3 out of 6 ponies had skipped off and legged it was the least of my concerns but it worked its way up the jobs list and finally yours truly set off across the hills to find them.

As usual they were as far away as possible

I had hoped they would be by the watering hole but no....

So, Pronto, surrounded by some very pretty ladies was in no mood to be caught

but patience and perseverance paid off

and with the bucket of allure I soon had Will.I.Am in tow and the chief trouble maker Misty the shitland

This led to Pronto following as they are herd animals as well as 5 ponies of the night.

past the technohermits abode which is going through some stages of paintwork.
Pronto disappeared but Will.I.Am and Misty are now safe in the field and Misty will be leaving soon for her holiday where toddlers dress her up and brush her to within an inch of her life. Revenge.

Meanwhile the Donkeys decided to unload the car.
Posted by Tony at 13:14 0 comments

The show must go on

25 minutes after saying farewell to BooBo yours truly, the apprentice and rug rat Mk2 had to go to the scout hut where it was the end of term water fight and so as several hundred cubs and beavers were depending on me to supervise this (ok 30) the show had to go on despite feeling completely unlike wanting to get soaked by pre adolescents brandishing super soakers seeking revenge for making them weed the local gardens to gain their community service badge. 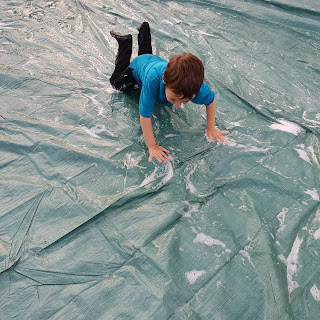 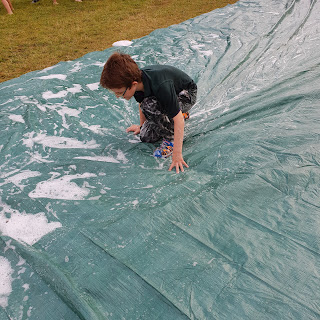 each grinding to a halt instead of slithering gracefully into casualty.

and ate a MRE I had prepared earlier. By prepared read stuck in my rucksack.

Ever the opportunist RRMk2 took advantage of the spare.

Back at the Ranch someone already had Reubens space on the sofa.
Posted by Tony at 21:31 0 comments

We know Bernese Mountain Dogs have a short and happy life, but it was a bit of a shocker Tuesday to come home from paid work to find our lovely big boy Reuben in real distress.

Seen here Sunday morning with his daughter Ripley he seemed absolutely fine when we left him, a bit thinner than your average bear of a Berner but otherwise quite bonny.

Here he is 48 hours before on patrol with the clan

on a river patrol., In hindsight the number of times he sat down might have told me he was not feeling 100% but he was his usual self, boss dog and great company.

So I will spare you the gory details, suffice to say the conservatory floor was covered with blood, big pools of it. The poor lad was having difficulty breathing and kept coughing up more blood.

Yours truly took him straight to the V E T he jumped into the back of the truck, Reuben not the vet, which did give  a faint glimmer of hope but that was extinguished a the vets, the back of the truck has fresh blood and Reuben was in dire straits. He still made friends with everyone in the vets and they put his frantic breathing to the hot weather. Those that knew BooBoo Bear would have spotted the lack of tail wagging. The V E T did an examination and delivered the obvious, Reuben was desperately ill and short of a miracle in the next few minutes the situation was hopeless. BooBoo pressed his head into the vets shoulder as the likely cause and immediate future was discussed. Reuben had had a persistent cough for months which was treated as lung or heart worm and it seemed to improve, but we all suspected lung cancer. In a coughing fit while we were at work a blood vessel had ruptured and his lungs were filling with fluid. V E T was surprised he had survived until we got home . It was certain that another fit would rupture something more severe and be extremely painful so while I hugged the beautiful Bernese bear of a dog the Vet carefully put his misery to an end and BooBoo crossed the rainbow bridge to the rest of the clan. A merciful and peaceful end to a very wonderful dogs life. We are lucky to have his children and grandchildren to live on at Rock HQ.
Posted by Tony at 21:38 0 comments

Benson is recovering from his encounter with wood ants, his face is tender but looks like he wont be scarred for life. He is not the brightest bulb in the box of eco friendly LED replacements as while yours truly was out on the evening rounds feeding the critters

and marvelling at the tiny pony balancing on Apollo Benson was hanging himself on a window handle in an effort to climb out and join us.

Luckily he was spotted before he killed himself. Think he might have attachment issues, or a deathwish.
Posted by Tony at 13:11 0 comments

So having confidently stating that yours truly was going to keep the blog up to date why you may ask, why did I disappear for a week. Well nearly. Ok so not a week but its not been up to date. Well its for charity mate, yours truly along with other press ganged members of the Lions ran a charity shop and raised enough money to buy 5 shcools in a box for UNICEF and if you dont know what they are ask google. Anyroad up this also led to me talking to the local primary school where I managed to avoid ruining 120 childhoods by heading off at the pass a revelation that Father Christmas wasn't real. In full flow I was telling the excited little kiddies how exciting being a Lion was and that one of the things we do is every year we dress up as Father Christmas' HELPERS! The looks of horror on the littlies teachers faces as the approaching lexical disaster looked imminent was followed by sighs of relief as the train shot by with HELPERS painted all over it.

Meanwhile Bryn is trying to disprove the theory that he has a brain cell and was found standing by the toilet staring at the wall, looking for pixies.
Posted by Tony at 12:47 0 comments

yours truly was up at sparrows fart

exploring the woods with several large dogs. Now, in our wood there are several Ant mountains, and I mean big ones, one has been there since 2006 and this monster is relatively new, well new to me, so off we wended having made a note of its location

and pondering the possibilities of this being a really old ant's nest.

So after our usual splash about in the river

we got home and got on with the rest of our day which for most meant lying around pointlessly. 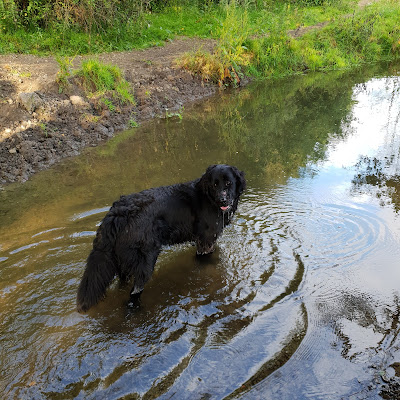 Fast forward 24 hours and a similar route taken and more fun in the river had.

Which was the time when I was able to photograph the state Benson had got himself into.

Unlike Bryn who has at least one brain cell

and doesn't stick his nose into ants nests, no matter how big they are, and here's another big one we found that morning, He is a sensible lad thus avoiding an expensive trip to the V E T. Oh and pain, lots of pain.
Posted by Tony at 12:37 0 comments

A day of contrast

So the day started early doors with a low level patrol

with the clan Patriarch, Reuben, to the river

trips up the Bonsai Mountain will resume once the hot weather subsides.

Plenty of water stops ensured this old boy wasn't too stressed by his exertions.

Much later…. as is tradition when attending such an event, a super hot Nandos was scoffed down with a bucket of ice cold diet fizz to alleviate the pain

before finding our seats to prepare for something very special and very loud. 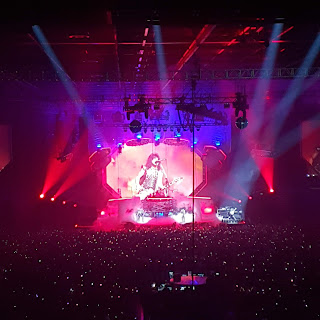 Kiss were in concert and this was their final tour, ever.

In every way this was a larger than life gig.

Without doubt the best gig I have been to since seeing Pink Floyd 20 years ago. 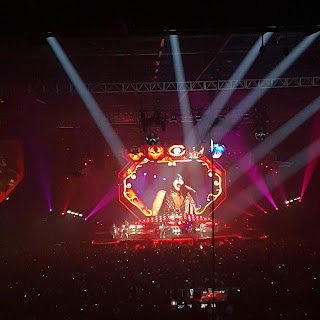 To say it was loud would be an understatement 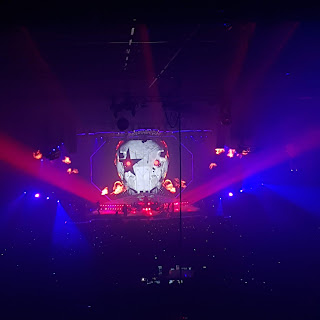 and I spent the whole gig grinning. 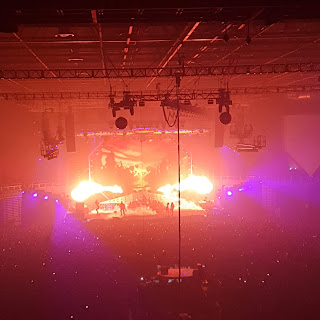 which probably explains their lack of regard for health and safety. Cue flamethrowers!
Posted by Tony at 21:42 0 comments