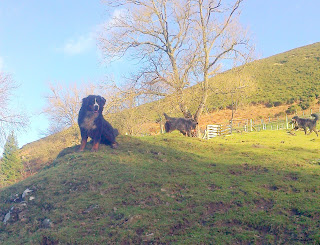 Things didn't go quite as planned today (for a change) (mind you the week off work isn't going as planned either) in the few hours I wasn't at work. Signs were ominous when the farm supply bods only had 10 wooden rails when yours truly wanted closer to 100. So thoughts of extending the fenced off areas at HQ fell at the first hurdle so instead I embarked on a few hours clear up shifting the old fence posts down the bonsai mountain. Thanks to impeccable timing (aka luck) I picked the two hours of clear sky and sunshine to run (ahem) up and down the slippery slope to retrieve some of the 200 old fence posts dumped at various points on our plot of green. 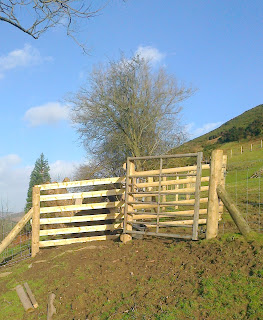 Its taking some getting used to, gates that work, hang straight and keep animals the right side of them 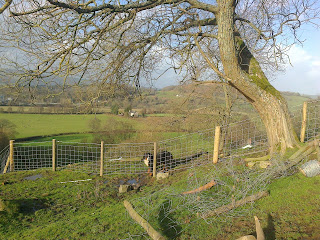 and the Berners are having trouble getting used to finding dog proof barriers where they were used to holes.
Eva produced a new trick to get out being milked tonight, the dogs get all the milk at the moment as its a bit unhygienic nay unpalatable after she has put at least one hoof in the bucket, farted over it, sat in it, forward rolled to get away and tonight she reached underneath her and began to drink the milk in the bucket. Perseverance is the key, one of us will give up one day.
Posted by Tony at 22:02