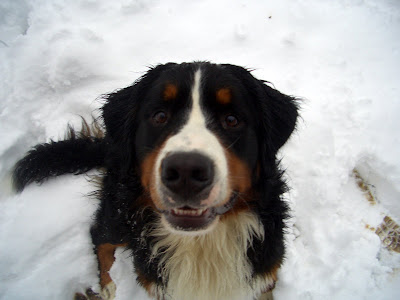 As predicted its been a great Christmas day at Rock HQ and its been a white one. The snow remains and there are places where it is pristine white, the majority is stained all sorts of colours thanks to various deposits from numerous animals. There are also bare patches where the sheep have curled up to sleep melting the snow beneath them. Strange wool ringed dirty circles line the lane.
Not everyone had my enthusiasm for Christmas, especially at 4.30 am and I was told in no uncertain terms the sort of injuries I would sustain if I continued to try and persuade my sleeping beauty to go and see what Santa had delivered. I knew he had been as the Berners were on guard for any fat bloke bearing gifts (there was a false alarm at aound 11.30pm but they soon got the message that the fat bloke they were looking for wore a jolly red suit and not dirty jeans and t shirt) so had let me know it was time to get up and get amongst the gift wrap. I lay in the darkness impatiently and put the clock on by an hour. Tracey convinced she had slept in, was in fact drinking Bucks Fizz sitting on the sofa surrounded by excited Berners who were listening to Greg Lake singing the ultimate Christmas song a lot earlier than they thought. Presents were opened and our family and friends have been far too generous and we have been spoilt. So any of you reading this, thank you very much for the gifts.
I now have a new camera, and a new pair of glasses to read the monster sized instruction manual. I have tried my usual press the buttons and see what happens routine but this one is a mite more sophisticated than the last ones, and certainly more robust. "Unbreakable" apparently although I have been reminded several times this is not a challenge.
Animals were fed and watered, most then chose to frolic in the snow before having a snooze. The Technohermit had his lunch delivered and forced me to drink an enormous whiskey with him. I somehow found my way back to HQ and we had a lovely lunch with Beth and Tom, I had for once remembered to cook the pudding in time and so by the time of the Queens speech we were all stuffed. A glass of port with Her Majesty, a call from Ben who decided to buck with tradition and go somewhere else for lunch and the afternoon was set for the compulsory lapse into unconsciousness watching cartoons. Happy Christmas everybody! 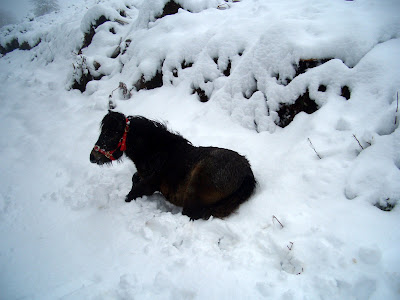