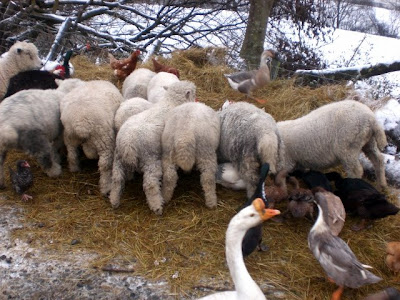 Paul the excellent vet called today, luckily he waited until it was really snowing and I after had drunk a rather large glass of Anna's winter warmer, a very nice home made damson vodka that does exactly as it says it does and can also strip paint off doors when either applied directly or from the fumes breathed out after consuming. So while Paul was explaining the intricacies of goat blood types, circulation and nervous systems I was utterly engrossed watching the very pretty snowflakes melting on his hat. Fortunately for goat and vetkind Tracey my oh so patient and beautiful wife was sober and understood the diagnosis that three legs were good, one was bad, but not that bad. After some deft work with the scissors the bad was removed and the good given a good dose of magic blue spray. A quick jab of superstrong antibiotics and Geisha, now looking like a mutant Smurf was left, as found, eating hay, straw, planks of wood, buckets, in fact anything that took her fancy.
Job done Paul was thanked profusely and he left before getting snowed in.
He will be back though.
How can I be so certain?
Well he's left his rather fetching hat.
Geisha didn't like the taste so its quite clean and only partly chewed.