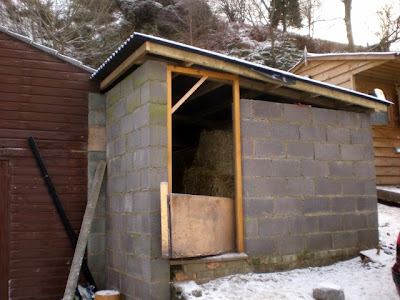 The camera has been persuaded to work for a few more pictures before its final destination at the great recycling plant so here is a pic of the annex which as you can see now has a roof. The door should be in place tomorrow and the windows hopefully by years end. The roof has already allowed the workshop to start drying out much to the frogs annoyance. Plans to clad the building and replace the front of the workshop so it looks like the stable have been put on hold but all in all the end result will be a very functional and well used building. Once we move the hay out. Again.