Merry Christmas one and all! 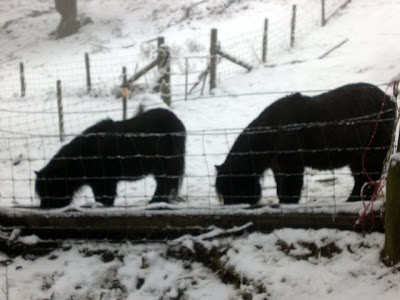 The day started early at Rock HQ, first light, which admittedly was half seven given the freezing fog but we were up and trying once again to get water to run uphill from the well. A new strategy was employed, the pump in the well pumping the water at max capacity along a 30 metre pipe that was either level or just a tad downhill thus lulling the water into a false sense of security and allowing it to build up speed and pressure until it reached the yard where it met a narrower pipe that went nearly vertical to the reservoir, and I am happy to say it worked. Well nearly.
The water would exit the pipe six inches below the opening to the reservoir but as soon as it was lifted to the aperture the flow annoyingly ceased. About a thousand times. Finally I had the idea to suck on the pipe and somehow that managed to set up some sort of uphill siphon effect and the water poured out. Trapped holding the pipe for an hour I was pleased to see the level rise by three inches. Suffering from the onset of hypothermia I managed to wedge the pipe in place with a small rock (which turned out to be a frozen sheep pooh) and left the arcane device to continue to defy the laws of physics and replenish the water supply. This would have worked fine had a sheep not sat on the cable pulling the plug out of the socket as soon as we left to visit Jill, Tracey's lovely mum in Telford. When we returned to Rock HQ six hours later it was a trifle annoying to find the level had not risen any since I last looked. Thankfully as I was starting the whole tedious process off again the real pump from the borehole unfroze and we had a plethora of water sources. The tank is now full and all is well in our world. And clean.

The day ended with a walk around the hill to take our Hermit some coal and cat food, I think the cat food is for a cat, not sure though. Carrying a 25kg sack of coal up a snow clad bonsai mountain in the dark with pockets stuffed with cans of tuna surprise is an easy task, especially if you are a fit athletic type. For a fat forty something it was an ordeal which my back now reminds me I should not have attempted, but he needed it and it is freezing in his abode so I battled on. As usual he wrong footed me, my ill temper evaporated as he thanked me profusely and handed me a card. He doesn't believe in Christmas, he knows it exists but that's for other folk, not him, so he gave Tracey and I a Thank You card with a short verse inside he had written. He refused the offer of a meal with us on Christmas day but felt able to accept an extra meal delivered at around lunchtime tomorrow. Especially if there is a helping of Christmas pudding.

I walked back to HQ with Berners bouncing around in the snow, watching the Stable Sprite struggling to get his van up the snow covered lane to wish us a happy Christmas. Across the valley Christmas lights flashed in competition with the neighbours, none so splendid as Steve's the electricians, hardly a surprise really. And there I was clutching this card suddenly feeling very happy, its Christmas at Rock HQ and despite what this year has thrown at us, thanks to friends and family it will be a very good one.