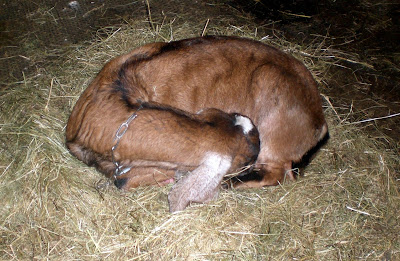 Poor Geisha is recovering after an encounter with a most excellent Vet called Paul who attended Rock HQ and rebuilt her, he had the technology. It seems that the cuts on her leg were dog inflicted, which one of the ten culprits is yet to be established but thankfully she is on the mend despite having to have 8 stitches. Her addiction to dog biscuit was probably the root cause of the conflict and perhaps she will steer clear of the mutleys when their heads are in the bowls. Geisha has been compensated for loss of dog biscuit by scoffing ginger nuts. We cannot actually give her a ginger nut biscuit as that is against the rules of goat keeping established by Lord Defra. She has learned to help herself from the plate while we have elevenses.

Someone else who is also in stitches is our friendly builder Pritch who chopped the end off his thumb while chopping onions tonight. Luckily he had Ben on hand who is a bit used to dealing with blood and gore, although not usually self inflicted and took the unconscious leaking chef to casualty. Ben was really concerned, but when he found Pritch hadn't actually bled into the spaghetti bolognaise and dinner wasn't ruined all was well. Thankfully Ben phoned us first and now everyone is texting fake injured thumb pictures to Pritch in a bid to cheer him up. He can text back, a lot slower than most of us on account of having only one thumb operational. The joys of technology.