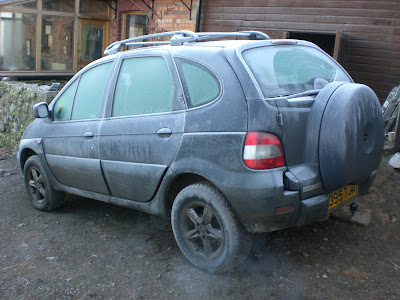 This is Rene our oft abused Rx4 who provided an interesting footnote to the day at Rock HQ. It has been a great day on the whole, for the first time since the tree felling operation it actually looks like there is an end to the job of moving brash wood, chainsawing trunks and chopping logs, a massive pile of which await a move to a permanent home. The bonfire today cleared away most of the remaining twigs from the bank by our reservoir.

The Stable Sprite has begun the task of roofing the annex, his task made much easier by me leaving piles of stone, dirt and other detritus in his way. He has diligently worked around these obstacles without comment but I noted he ate my bacon sandwich at lunchtime so I sensed he wasn't happy. But its starting to come together out in the yard.

The kids arrived with a Christmas tree so I left Stable Sprite to it and baked mince pies and soon we were scoffing fresh baked goodies, quaffing mulled wine and applauding Ben's efforts at trying to get a Christmas tree to stay upright. He might have been to war but there are still a few man tests to pass, the arcane art of Christmas tree balance is one of them. An ever increasing number of bricks and rocks eventually persuaded the Norwegian spruce to stay vertical.

All was well in our household, except Beth phoned to say that the exhaust had fallen off Rene. Again. The third time since we have had him. The bright side of this is that we think he is still under guarantee. We shall see.