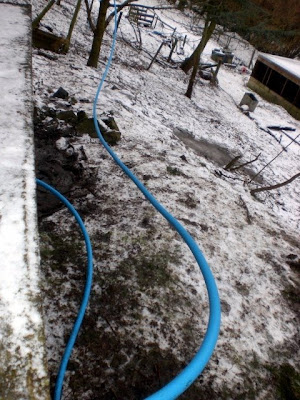 After a few hours messing around, three trips to the local farm supply shop (only two of which were for supplies, the third and final trip was to pick up what I had already bought but left on the counter, famous last words end of trip two, "Hopefully wont see you again today", reply from old hand at shop "Dont bet on it" ringing in my ears as I entered the shop for the third time) and much sliding down the vertiginous slope that leads to the reservoir we finally managed to get a trickle of water to dribble out of the pipe. Its a question of context, that same trickle falling through the ceiling would be a horrendous torrent but as its what all life forms depend on at Rock HQ for its water supply its a tad disappointing flow wise. I am sure some clever bods will be able to tell me why its falling out of the pipe slower and with less pressure than it can fall out of one of my ponies todger, all to do with friction or something but I would have thought the pump would have been able to handle it. After all its not from an aquarium or anything, no, that was binned at 11 am when I finally conceded that a small ornamental fountain pump hoarded away a few years back was not up to pumping water fifty metres, most of which is uphill. 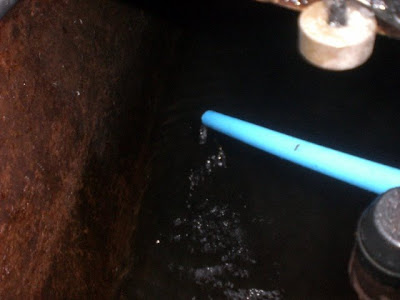 So now we are getting water out of the taps and at the current flow hope to flush the toilets by tomorrow. I expect it will all have thawed out by the time we get anywhere near the right levels but at least its saved us dropping a bucket down the well and carrying it into the house. Mind you the cost of the pump and the pipework could possibly have employed several out of work strawberry pickers for a month but that's a separate issue. I have reduced the amount of water consumed at Rock HQ by increasing the amount of Ben's beer drunk. 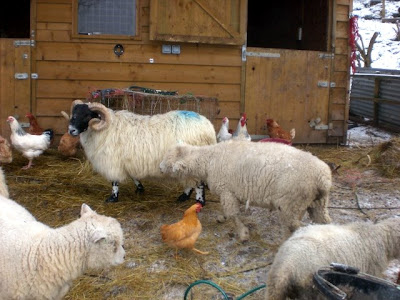 We had an unexpected guest in the yard today, more of our sheep arrived over the last few days. Today Roxy wandered back with her new man in tow. Crispen took an instant dislike to the handsome new ram and proceeded to head but him round the smallholding until he got the message he wasn't welcome. That said the ram is currently under the eaves of the stable sheltering from the snow and surrounded by Crispen's harem.