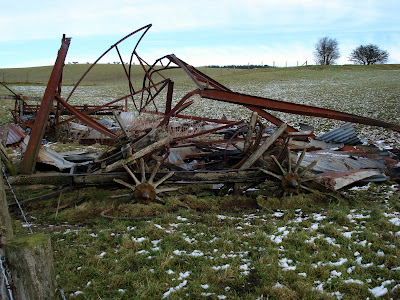 For once we are ready! We might not have a roof on the annex, the frogs have had a days reprieve, but we have a million tons of logs, a full oil tank (well full for us) and the pantry is well stocked with us even remembering to buy powdered milk. So if the next ice age starts tomorrow we are prepared.

The drive is just about navigable, the ice sheets are filling in the potholes that I missed with the mixed aggregates a few days ago. We had ventured out from Rock HQ and visited my parents, little sister and hubby who live a fair way away but it was worth the seven hours travelling, the temper tantrums at the traffic lights who conspired to make my life a misery by insisting on being red five times longer than green. None of us could remember when we last saw each other so it was great to catch up even if we missed lil sisters better half who was at work. Lunch was a lavish spread from the McTakeaway and it was while I was eating my burger and fries that I remembered the organic pork joints, sausages and bacon I had thought to bring but forgot to put in the car. Ah well, an excuse for another trip then!

We got back to a trainee winter wonderland at Rock HQ, even a small dusting of the white stuff does wonders to tidy up the yard. The Berners set up a skating ring at the far end and took it in turns to slither along on their backsides frantically trying not to knock yours truly for six, at least I think they were trying not to, fifty kilogrammes of canine hitting the back of your legs at speed is a fantastic test of balance.