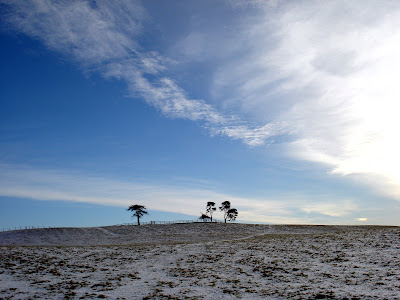 It was one of those crisp clear ice cold days at Rock HQ, the snow hasn't arrived just a really deep frost, the sun shone nearly all day and we got a lot done. First on the list was to clear out the annex so it could be filled with hay from the stable. The Berners watched this process with interest as, unbeknown to us they had developed a new game over the last few weeks. The type of game that involved chewing through the strings compressing the hay into nice neat bales. How we laughed as every third bale fell apart as either myself or Jill picked it up. Having salvaged forty or so bales from the canine playpen we had a rewarding cuppa and took in the view and contemplated what to do with the broken bales. The best option seemed to be to ignore them and hope they went away.

Meanwhile Tracey had gone over to get the boys loaded into a horsebox. The reason why they were being returned so sudden became apparent, they had been witness to a crime and needed to be moved as part of an equine witness protection plan. The stable at their temporary home had a generator to provide lighting. Some scrote drove up, loaded the genny and made good their escape. The nice lady who owns the field was worried the scrote would return and make off with the ponies, hence a busy day at Rock HQ to re accommodate them.

They were as good as gold in the trailer and seemed pleased to be back on their home turf.

After the rounds some friends called round, the type of visitor you like, the ones who bring a bottle of mulled wine so as it was half past drink o'clock we had a break from the chores and passed the time drinking wine and eating mince pies. A brisk walk around the hill averted an alcoholic stupor and we found two more of our sheep in the process.

The yard seems full with the horses back in their quarters, its great to have them back although I'm sure that feeling will wear off as soon as I see the mountains of pooh that will need shifting tomorrow morning.