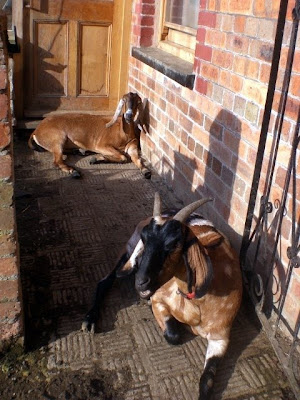 Its been another washout of a day at HQ. Ben the super soldier got a teensy bit emotional when his little sister turned up for breakfast. They set off for a day of visiting friends and family while we attempted to clear jobs off the to do list. As ever something or other put the proverbial fly in the ointment and while I was on an errand in town Tracey sent a frantic text message asking me to return as Geisha the dopey Anglo Nubian was in the yard with a severe leg injury. It is just over a year since we came home from work and found her hanging by her back left leg from the barbed wire fence. Somehow she has managed to cut the same leg, not deeply but putting a massive tear in her skin so that he fur was hanging and you could see the tendon. In pain but not bleeding she has had a shot of anti biotic and sprayed with the magic blue spray. Currently she is wrapped up in a goat coat (yes there are such things) and in a little den of hay in the stable. Tired and in shock she demonstrated a capacity for recovery by stealing three ginger nut biscuits as we sat and gave her fuss and TLC while having a well earned coffee break.