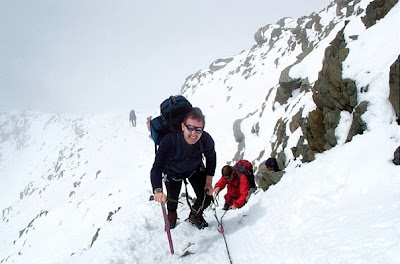 Its unusual to see any pictures on these pages that are not taken close by, this is a photo of a very great friend of ours, Paul, seen climbing the difficult section of Mt Blanc a few years back. Paul and I were introduced at a dinner a long time ago and despite his absolutely rubbish jokes our friendship has survived intact. There was a moment when I did threaten to cut the rope on this climb if he repeated the same joke I had heard ad nauseum for several hours (altitude does strange things to tolerance) and as I was holding a very big sharp ice axe at the time he, for once, heeded the warning signs. He is a man of great intellect, often leaving me way behind as he begins explaining something technical, a man who is just fun to be with whenever and whatever. He has taken my particular sense of humour well, especially the day I turned up at his house unexpected and pretended I had been invited for the week, he is quite unflappable, and believe me hanging off a rope at 4000 metres with a death drop to your right with only me guiding you normally causes a minor flap in the most resolute of climbers, especially as I am prone to turn round, wave a lose end of rope in the air and ask in all seriousness whether it should be attached to something.

Paul is an all round good guy, a great and devoted family man and we have shared many good times together. He is currently climbing an absolute monster of a mountain having been diagnosed with a nasty type of illness beginning with c. Without doubt he is the most cheerful desperately ill person I have ever spoken to, and true to form he has turned some positives from this. There can be very few people in this world who can persuade their consultant to prescribe them a medicinal cider whilst lying in a hospital bed but he has managed this. His "humour" may have even improved as he told me the worlds shortest joke today. Dwarf shortage.

It might be some time before we can think about a stroll up some of the biggest mountains in Europe, where I can share with him the joys of holding his wife's over mitt while he throws up into it. But I am looking forward to a beer with a true friend in the new year, as soon as the cells in his body start to behave and the consultant prescribes real ale rather than a girls drink.

The thoughts and prayers of Rock HQ are with him and his family and we know he will get better, the world needs Paul's. He makes it an interesting place to be.