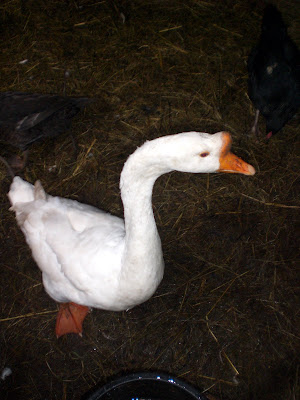 A strange occurrence at Rock HQ today, just after midday a strange yellow orb appeared over the brow of the hill. For a moment or two it caused panic in the yard as man nor beast had not seen the sun in weeks. No water falling from the sky meant jobs could get done so we had a huge bonfire to get rid of the brash wood from the tree felling. During this task we discovered that the Brown Chinese Geese were not as described when bought for Tracey's birthday last August. Instead of three geese and one gander we have in fact got three ganders and one goose. The three amigos were trying to mate with the previously thought of gander whilst at the same time trying to eliminate Sunny, Sally's partner a fine white example of Chinese gandery. A vicious fight ensued which was only broken up by threats of cranberry sauce condiments and the imminent arrival of the 25th.

Geisha is on her feet so all would be well in the goat world had Maggie not decided that she was once again in season, ran through the rival poultry factions and was last seen chasing a very confused sheep across a local farmers fields.

We have discussed a plan recently to stay at home and smallhold full time. Given the current crop of animal antics I think going to work is an easier option!