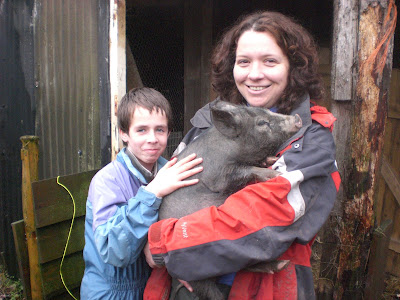 It wasnt that I had forgotten, it was just that I hadnt remembered that the Stable Sprite was inbound with two little piggies destined to be the major contributers to bacon rolls in 2009.
First thing I knew was Faith the gordon setter went mental at the window indicating that someone was lurking on the doorstep and it was only when I saw his gleaming white chariot parked on the yard that my memory was suitably jogged and suddenly saturday morning went from a leiusurley breakfast time to a get the pig pen ready quick as they need somewhere to live morning.

Now we knew that they were going to be smaller than usual. And we also know that Berkshire piglets ooze cuteness, but the Stable Sprite really didnt help my aim to raise more pork when he emerged from the white chariot with a tiny weeny piglet which he carefully handed over to Tracey who was beside herself with ooohs and aahs, stating with great reverence"This is Pixie on account she is so small and has little ears" 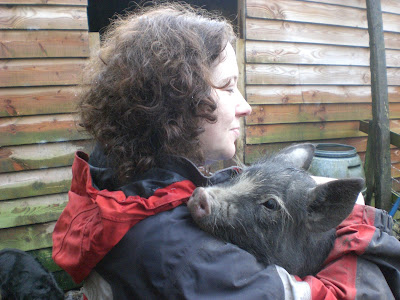 The walking bacon factory instantly achieved pet status, as did her bigger little sister piglet who is now known as Patches.
Cheers mate 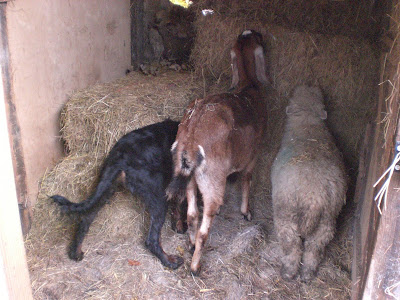 The major task of the day then apart from prizing the gorgeous piglet from my beautiful wife's arms was to move the bales stored in the pig sty up to the stables. The usual barn the pigs are housed in are uninhabitable at the moment due to flooding. It seems the millions of gallons of water that fall on the hill all want to collect in the old barn. So I endured monster spiders, rotten eggs and an abundance of rat pooh to clear the building for the Stable Sprites latest offerings. Whilst Tracey cooed at and hand fed her latest rescues I began the task of shifting the bales uphill to the stables.

As you can see above Faith, Geisha and Daffodil were eager to help. None of them were any help though when a prehistoric rat showed its utter disdain for my authority by walking over the bale I was trying to manoeuvre out of the doorway. For a second we were almost nose to nose and then it lazily turned and flopped through a hole in the wall. Faith arrived in the nick of time to totally miss the rat but witness me try to exit the pig sty through the roof in my eagerness to put as much distance between man and rodent. 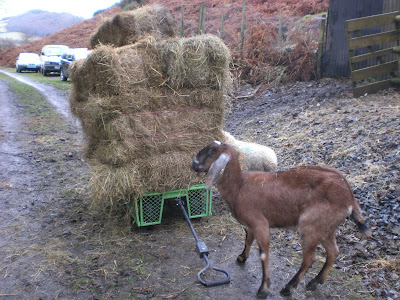 With no limit to my ingenuity to speed up the job I loaded the green truck up with hay and with Tracey's encouraging words of "You' ll never make it" I set off at a blistering pace pulling the overburdened trolley after me. It was easier than I thought, especially with Tracey pushing from behind.

My vision blurred from the effort, the finishing line was in sight, another fifty metres and we would be there, I dug out blind, we would have a crystal, we would get a gold medal, my arm was straining but we were going to get there, nothing was going to stop us now.

Suddenly it all went very wrong. 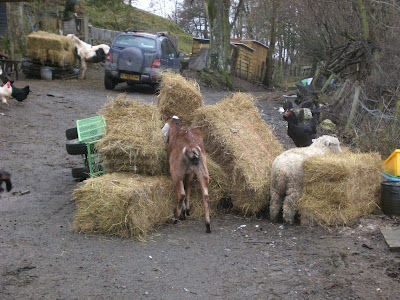