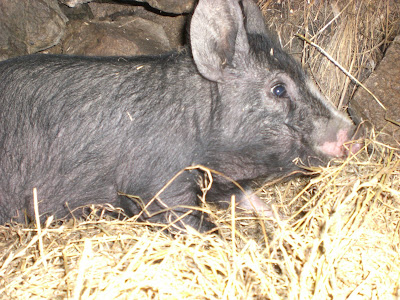 We live on a hill. That's a fact of life that we accept here, nowhere is very level, in fact the level bits are just less steep hillside bits. Everyday I am reminded of the fact that we live on a hill, I get into Rene the RX4, release the handbrake and two minutes later find myself two thirds of a mile down the hill at the gateway to the road. So we never forget we are on a hill. But there are times we don't remember, there is a difference.
Like Beth not remembering so when she got out of her car and hadn't applied the handbrake she found her little green Fiat heading straight for her and actually running her down.
Or tonight when Steve the Logs and Steve the Chainsaw called round primarily to drop off a load of oak logs but also to have a close look at the two errant ash trees that still threaten to fall on the stables and house. As we unloaded the logs and discussed the merits of tractors pulling trees, the angle of slope and the levels of mess and mayhem they expected to create there was a collective lapse of memory regarding the degree of slope on which the 4x4 and half a pickup converted to trailer was currently parked. Steve pulled forward allowing Steve access to the tow bar and hitch. I watched as he uncoupled the massively heavy trailer.
Gravity reacted faster than Steve and despite his broad Norfolk accent reaching falsetto heights I could tell he was not enjoying having his genitals impaled on the tow hitch as the trailer rolled down hill pinning him to the 4x4. It took all my effort to ease the pressure by pushing against the trailer, all Steve the logs efforts to stop laughing at his mates crushed family jewels and assist and with Tracey joining in we finally managed to push the trailer back a fraction allowing Steve the Chainsaw to fall to the ground groaning and cupping his severely wounded bedsnake.
There was another few seconds of sweaty panic as Tracey left us to put a brick under the wheels and as soon as it had started it was all over. Steve crawled into the cab while Steve re coupled the trailer to the tow bar and they rolled out of the yard.
Never ever forget.
We live on a hill.
Steve wont, not until the bruising goes down anyway!
Posted by Tony at 21:36