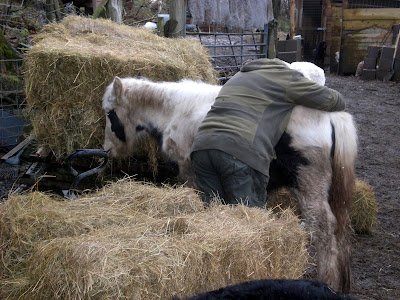 Despite both suffering from flu, and it is flu, not a cold, Tracey and I have had to get on with the routine here at Rock HQ. The lives of some sixty animals depend on our ability to get out of the front door and tend to their needs. Some of them do come in the house from time to time and I must admit to having suffered a massive sense of humour failure today when Geisha came into the cottage undetected and started picking tinsel from the Christmas tree. Once spotted she panicked and instead of sensibly heading out through the open front door she leapt around the furniture bleating hysterically whilst yours truly pursued her with malice aforethought. The chaos only ended when she missed her hoofing on the coffee table and sprawled sideways taking the CD player, table lamp and assorted ornaments with her. Having been unceremoniously dragged back outside and dumped on the doorstep in the rain she rather pointedly poohed over and in my boots before setting off towards the stables to annoy the horses.

We might have a Caribbean theme to our Christmas lunch, a menu that curried goat would not look out of place on!