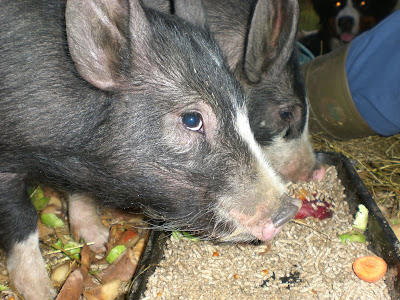 Ben and Beth went to town today and are not returning to the sanctuary of Rock HQ until Sunday when we hope Tracey's family will come over and help eat the turkey leftovers.
Its been a very sunny and pleasant day and the sunshine prompted me to move the barrow loads of fresh offerings from the horses bottoms to the garden. This sudden attack of green fingers ended with a coughing fit that almost produced a lung to garnish the fresh steaming horse offerings and so with my desire to breathe stronger than my desire to be the new Alan Titchmarsh I gave up the garden and spent several hours brushing the pony, trying to get rid of the tide mark from his forehead and just sitting and watching the pigs.
Patches has cottoned on to the idea that its best to make friends and influence people and so allowed me to pick her up for a bit of a cuddle before being returned to the trough to continue stuffing herself with fresh veg, fruit, pig nuts and unexploded popcorn. Pixie, the one closest in the picture maintains her vigilance against human pig contact and explodes with mock piglet rage if you try to touch her by surprise. I am sure she will settle down, especially once she considers the alternatives.
The pigs were not the only ones having treats, below you can see Apollo on his knees in excitement at a bucket of carrots, a present from friends down the road whose dogs we are looking after while they are in America. 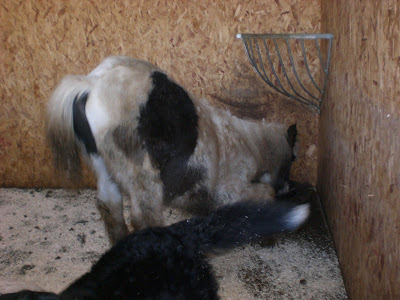 So once again there are ten dogs at Rock HQ, five of which are Bernese Mountain Dogs, all sat around the fire. We saw The Oracle while we were collecting the dogs, he was celebrating Christmas, full of Christmas spirit in his yard having just come outside to walk his dinner off as he missed it yesterday. I waved at him in the dark as I drove Rene through he jovially shut the gate for me. I didn't think to ask why he had missed yesterday, well you don't ask those sorts of questions round these parts.
Posted by Tony at 19:59