Maggie gets her Man! 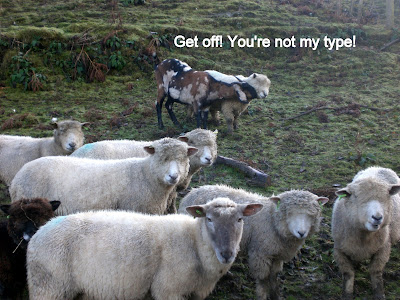 Maggie our Boer Anglo Nubian Cross Goat is a bit confused at the moment. She is a goat with baggage anyway as her mother died suddenly from entrotoxiemia when she was a very young kid, from that day on she made it her mission to be as annoying as possible. So far she has put a hole in the cottage roof, dented the roof of several cars, eaten a whole vegetable patch and got herself stuck in numerous fences in various locations, usually when we are in a hurry.

Every so often her bothersome behaviour reaches new heights as she comes in to season. For a while it was me she would stalk but she has found a new target for her amorous antics. Poor Crispen the ram has not been given a moments peace as she tries to persuade him to give her the special attention she thinks she deserves!