Now you see me! 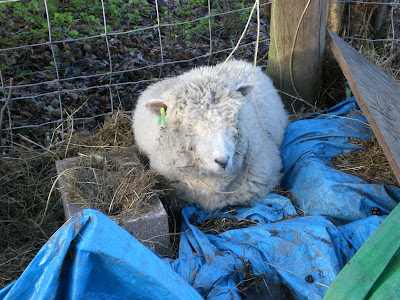 Its been an incredibly busy day here at Rock HQ, the sun shone throughout the day and despite the antics of our animals (see Hercules above trying to hang himself) we managed to get a huge amount of work done. As well as the routine, the feeding, the cleaning and the making sure all inhabitants of The Rock are fit and healthy we set about a revamp of the kennel block. 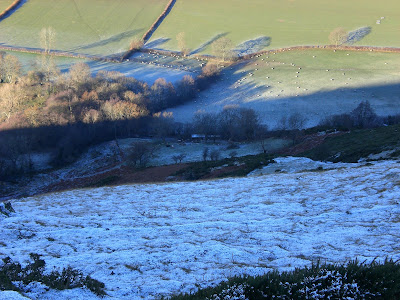 The above is the view of our smallholding from the hill behind us, ours is the long thin strip in the centre, the kennel roof shining in the middle. Since it was built by Karl last March, and where Karl is no one knows, we think still tied to a tree in Thailand, the kennel block has been an absolute God send. Having housed the magnificent seven while we are at work it has also doubled as a maternity ward for the Ryelands, an emergency shelter for the goats and a temporary store for tools.
The only downside to the building is that when it rains heavily it can flood. A minor setback as it only rains heavily about twice a week (see here comes the flood in the archive) but it does upset the dogs having to take to the life boats every time the weather turns.
The major task of the day then was to prevent the flooding by digging a ditch alongside the building, a task I managed admirably thanks to my new shovel and my bionic arm, the space age metal work only jarred and groaned a couple of times. Soon a foot deep trench ran from the stream, across the ground uphill of the kennel block and down the side out into the lane. Ideally the trench will go up the hill to the spring but for now this looks like it will serve its purpose.
Tracey and I set about rearranging the interior of the kennels, and those that have read these pages from the outset will know that Karl and tape measures didn't get on so he tended to guess lengths and heights which led to us having a six berth kennel block that is twenty four foot long but each of the berths are different and interesting sizes. The internals were dismantled when the sheep were housed inside and trying to put them back together was more trying than a Chinese puzzle.
Faced with a variety of different sized tops, fronts and sides of kennels I eventually opted to make one size fit all by wielding my mighty saw, with liberal applications of five inch nails and by totally ignoring any gaps, holes and overhangs so within hours the job was done. Each berth now had a raised wooden floor (just in case the ditch system fails) a plastic bed and a front and roof that they can sit on and watch the world go by until we get back from work.
It has been mentioned that I have never appeared on these pages, well there are good reasons for that, the main one being that the Tales From The rock are about the animals, not me. I also take most of the pictures so by that very fact alone do not appear. However, Tracey had the camera whilst I was struggling to nail the roof down on one of the berths and rather sneakily she took my picture. As you can see below she captured my good side. 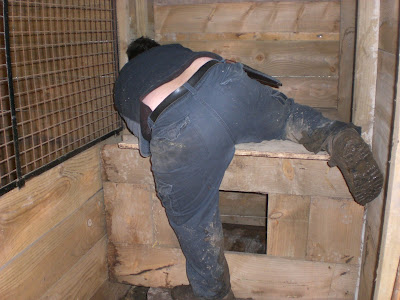 In case that's traumatised you here is a picture of William to take your mind off what you have just seen! 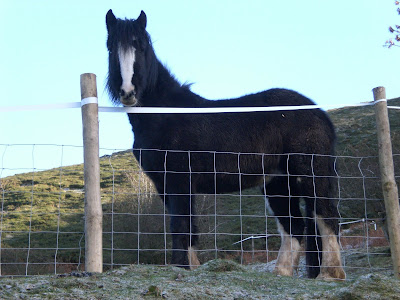