Its a Dog's Life! 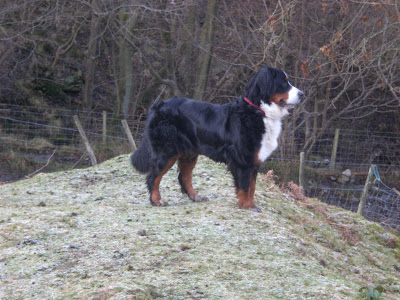 There are many hazards facing a smallholder, goats lurking in dark corners to mug you for the feed buckets, Ryeland sheep rushing you from behind as they try to get to the food trough, pigs biting your legs as they mistake you for their breakfast, come to think of it many of the hazards do revolve around feeding time.
Aside from the hazards there are the emotions that you surf throughout the day. The highs, the knowing that you are so lucky to be here on this planet in this very spot at this very time feeling like you do, no one will ever experience it quite like you do and once you recognise that moment its gone. Forever.
Today I note a new emotion, not one I am prone to but as I am about to head out into the dark wet evening to check on the horses, to make sure the goats are shut up safely, to put the birds away before the fox takes another and all the jobs associated with the evening routine I am feeling jealous.

I must say I am not exactly feeling 100%, Ben is back on leave and has very kindly given me an irritating cough, runny nose and all the aches and pains normal for man flu. At least I hope its just man flu, not some weird tropical disease he has brought back with him, currently he is not being a very brave soldier lying in bed claiming he is dieing.

I have manfully ignored the symptoms and got on with the farm, taking the water up the hill by the bucket load to the horses who had the poor manners to drink it almost as fast as I could carry it really took it out of me though and all the while I was watched by the Berners. 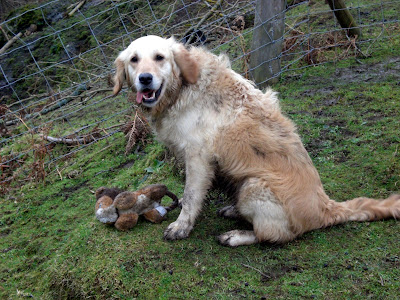 Poppy busied herself with a toy lion practicing her retrieve by throwing it and then herself down the hill and then running down after it, running up and down to the point of exhaustion. The thought of putting panniers on the Berners to carry the water did cross my mind, they were after all used for such jobs in Switzerland. Eventually all the jobs done I got back inside to a hot drink and got on with house jobs.
So why jealous, well after all their hard work watching me today the Berners have crashed out around the fire and are stuck there like limpets while I have clearly indicated that they should join me again outside. Everytime I walked past Rocky he really concentrated on being asleep.
And as for Reba! 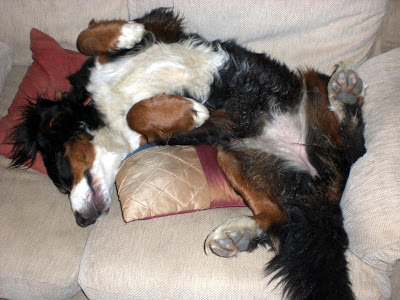