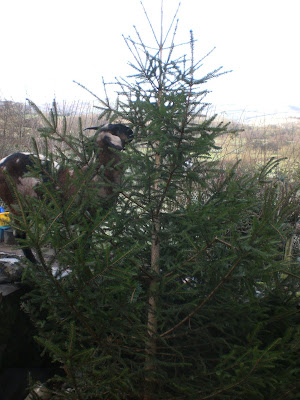 I had planned to do so much this holiday but Ben bringing the lurgy to Rock HQ has scuppered all plans. So instead of getting ready for Christmas by making pates, mince pies and other Christmas goodies, making Christmas presents with the sublimation printing gear (which now works thanks to me discovering the reason why the printer wasn't working was due to me having used nearly all the memory on the computer from ripping my CD collection onto the hard drive) chopping down trees and storing the logs, fixing the leak on the bath and generally crossing a load of jobs off the to do list I have been attached like a limpet to mugs of Beechams cold cure in a vain attempt to fight off the worst of the flu.
We did get over to the Stable Sprites on Tuesday night and had a jolly evening eating lasagna, contemplating the likelihood of ever getting over to Mr20%'s to try a Beef Wellington before standing in reverential silence around the bacon slicer marvelling how it cut the bacon so well. Its a testimony to how I have changed over the years, no longer do I go to visit friends to play wargames or drool over their new motorbike, no, I now get excited about going to see bacon slicers and vacuum packers.
So as I wallow in self pity I did have a major sense of humour failure when getting the Christmas tree into the house became a race against time to complete the task before the goats ate it.
Failure piles on top of failure with the end of my 30 30 challenge. Everyday for the last 17 days I have cycled for 30 minutes (7 miles) and intended to go on for 30 days. That ended yesterday as the flu got the better of me.
The good news is Ben is getting better so he is cheerful for the first time this week.
Kids, they are worse than goats!
Posted by Tony at 18:32