The quick and the dead 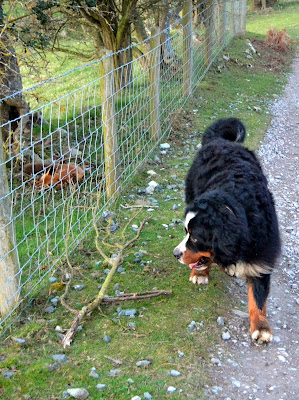 It might just be me, but this must be the only country where , as you go about your lawful business, in this case stopping your mad cow hassling walkers (she jumped out and was keen to share their picnic, the fact that they were carrying it in their rucksacks and didn't want to share with a mental bovine was beside the point) that you can observe a large body of armed men suddenly silhouetted against the skyline and advance purposefully towards you and not feel like your world is about to end, take cover and hope that either they pass peacefully or that they don't find you to discuss their political or religious views.

So there I was, unarmed aside from a Nikon and a large number of dogs, and there up on the Bonsai Mountain were at least half a platoon of camouflaged gun toting men advancing on our house. The dogs being the brave sort sought shelter behind me, I stood and watched what was going on. A red streak went left to right, a gun was pointed in its direction, I did clench slightly as its direction was me, the red streak disappeared into the gorse over the brow, two shots, a wave and the men walked on. I did the same, towards the shots as this was home.

A man who looked like a mercenary was stood in our lane, he looked like an extra from Full Metal Jacket who had had a fight with a pirate, all camo, gold teeth and earrings, rifle cradled across his chest.

He pointed to the fence line, a dead adult fox.

"Theres two more up behind the house in that gully bit" pointing over his shoulder with a gloved thumb. He turned and began walking after the others, "We got four so far, this hills crawling with them, don't normally come out this far, we'll be back" and off he went into the sunset. (really he did)

So our birds can sleep safely, or a bit more safely, four less foxes (at least) one was probably the culprit who took a hen this week, in broad daylight. Perhaps two of them were the ones play fighting by our sheep two weeks ago, either way I'm glad they are gone. We are, to say the least, over run by Mr Fox.