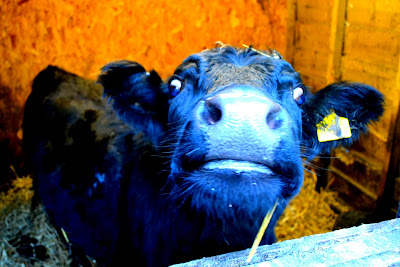 While the apprentice smallholder made his mothers heart melt by giving her his efforts with blue paint on canvas, several cd's that the cd police are not allowed to confiscate and some chocolates, yours truly was faced with a mad cow making funny noises and looking at me funny. So part of the day was spent moving critters around in the hope that a new configuration would ease the housing shortage for mothers to be. Matters became critical mid morning when Piggle started to build a nest and any idea that she might only be faking pregnancy in order to avoid Mr Whirlpool were dismissed as she has now, along with her sister Iggle achieved the hallowed accolade of pet status, meaning I cannot eat her and I need to find her somewhere to live. Fast.

So, Daffodil was taken along with Mindy from the med bay which also houses the straw in large white bags, and put in what was the old rabbit run but was more lately the goat house (Big rabbits or small goats, you decide) All animals were given a generous bedding allowance which emptied two white bags, the remaining two were placed up on the bank on pallets double wrapped to prevent wetness. This meant Hetty could go into the med bay which really pleased Kayleigh who until today had been forced to double up with Hetty as Hetty kept jumping out of the Corral OK.

After a lovely Sunday lunch with my beautiful and oh so patient wife's mum and brother where little t demonstrated his newly acquired skill with a spoon, I got back on with the new order. 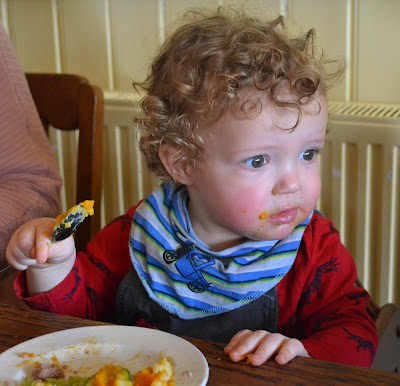 Iggle and Piggle were separated from the three little (massive) pigs (without us spending hours running up and down the lane shouting at naughty porkers who wouldnt go where they were supposed to be, honest) and put in a purpose built substantially reinforced pig pen off the Corral OK where they soon made them self at home in the deep straw bed and we will have to wait and see what, if anything, happens there. 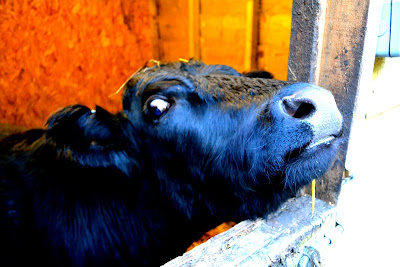 Today's jobs have only bought us some breathing space, we still need more space, or rather the space taken up by the three not so little pigs. This may be resolved by next weekend. By which time there are bound to be new critters here.

Is Thor the daddy of the pigs with Iggle and Piggle ? Or is one of the other younger Mangalitsa father them ? Good luck with Hetty, hope the birthing goes okay.
Kit
PS Looks like we will be getting a mangalitsa cross after all just not with the Berkshires.