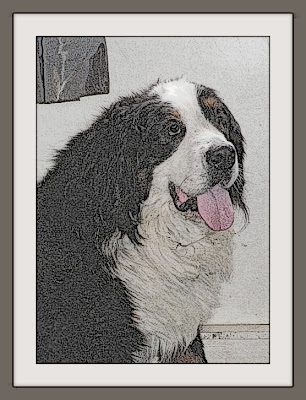 Plans did not go as well as they might today due to the sudden illness of Aunt Montana our long term foster Berner. Last night as yours truly destroyed the last vestiges of resistance from the straw bale, Montana sat quietly watching, head drooped and panting. Unusually she didn't eat her food, even when given real Berner treats like chopped chicken she just keeled over and looked wretched. She was drinking, obviously passing wind at one stage (I got the blame) but in all was not a happy canine.

By this morning she was lethargic, in fact totally sloth like, refusing to move. Morning routine was spent tending poorly dog until vet had finished breakfast and opened shop. Thankfully Paul our favourite vet was on duty and he took bloods and injected her with a large number of different magic potions. On the plus side he found that Montana had an incredibly high temperature, which to us was good news as this probably meant infection rather than a serious sinister illness to which Berners are prone, and Montana being the later side of seven years old is an old Berner. Much like yesterdays advice, it was wait and see (incidentally Ebony has not dropped any more intestines onto the planet and seems totally non plussed about the whole affair) so Montana was brought back to HQ, carried back into the kitchen as by now she had absolutely lost all desire for self locomotion.

Lunchtime brought a call from Paul, bloods seem clear, higher than normal white blood count, infection, probably a really nasty kidney infection, keep her fluids up. Montana had in fact perked up a bit and was perhaps feeling a little less immobile and feverish as she had made it from the kitchen to the fireplace where she was snoring heavily.

Nighttime saw her asking to go outside and she did mix with the rest of the magnificent seven for a while, even eating some sliced roast beef, a good helping of fresh goats milk and the last scraps of little ts birthday cake (Victoria sponge). As I type she is curled by my feet, snoring and looking a lot less like a dog at deaths door.

Not for the first time I thanked the small god of self employment as I was able to rearrange my entire day, thanks to all those who were so accommodating, and by bedtime I had almost caught up. No time to go out and look for the aurora borealis or whatever its spelt, but I did manage another 30 30 session as well as a night time trek halfway up the bonsai mountain to retrieve Daffodil one of our Ryelands who had left the flock and from the looks of her is about due to lamb, well definitely in the next three weeks anyway. Shes now sharing the med bay with a large collection of white sacks.

Here's hoping she gets better and can return to the chaos of the smallholding soon. Good luck XX.

Poor Aunt Montana, I got such a feeling of dread as I started to read this post and was afraid she might be experincing bloat. But was relieved to see she is feeling better and I hope all it is a bad kidney infection. Poor thing, it is such a shame that larger dogs don't seem to live as long as the smaller ones. Hoping with fingers crossed that everything will continue to be alright.
Kit