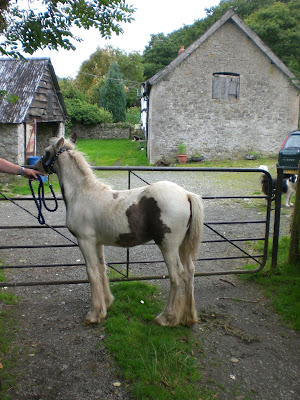 The Pgoor struck again and this time all five equines bolted as soon as the gate swung open. Having limited imagination they headed off up into the cauldron and then on up the flank of the bonsai mountain where they frolicked in the spring sunshine and nibbled at the grass while congratulating themself on how clever they were. Had they thought a bit more about what they were up to they could have hotwired Vic and headed off to the coast, gone for a canter along the beach before eating litres of rum and raisin and posing for tourists in kiss me quick hats. 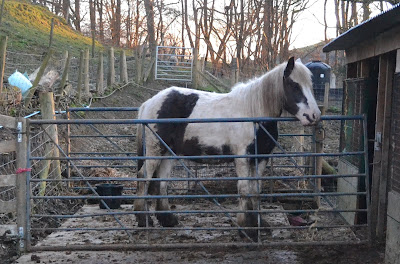 This predictable simpleness made my task on return from a mad day at the office an easy one as they were loitering just where I thought they would be and they meekly followed the magic red bucket back to base (the blue one having lost its allure) where they hung around like naughty school children. Suitably chastised the badly behaved equines went to bed without a murmur of protest. Chester did try and provoke a rebellion but his was quashed mercilessly by my feeding his co conspirators as he hung around at the end of the lane hoping they would join him. Eventually he got the message that access to calories lay inside his stable and not in playing silly buggers so he gave in and went to bed to sulk.

The pictures show pretty boy Apollo the day after he arrived at Rock HQ three and a half years ago, the second one as he is today. He's put on a bit of weight!

Wow, great choice of music to grind out the exercise to.

A male resident at Rock HQ putting on weight? Seems sort of a familiar phrase, just can't quite put my finger on it............!