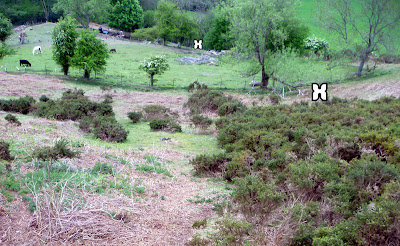 First light revealed the extent of the casualties amongst the poultry and for once we got off lightly. Most of the birds were saved by the fact that the poultry house door had blown shut meaning that they were hanging about outside waiting for their perches. When foxy came along they were able to scatter rather than be a captive audience at their own executions. The geese all survived by hiding in the stables, runner ducks live up to their name but clearly one was not fast enough. Two missing cockerels came down from the trees and other birds appeared as if by magic for breakfast. In total foxy killed three and took two, which is why she, and it is likely to be a vixen feeding cubs, why she was nearly caught by yours truly and Mr Beretta. Tomorrow night an ambush is planned. Foxy has to go.We just cannot afford to feed it. The pic above is not of mutant butterflies but shows where foxy lives and where our birds are housed.Too close for comfort! 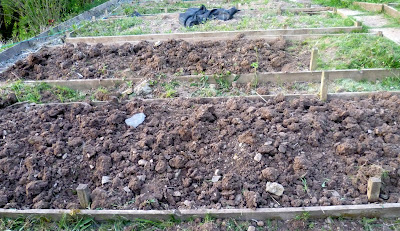 Pic above is more work in progress, the veg garden is finally getting back in shape!
Posted by Tony at 22:57