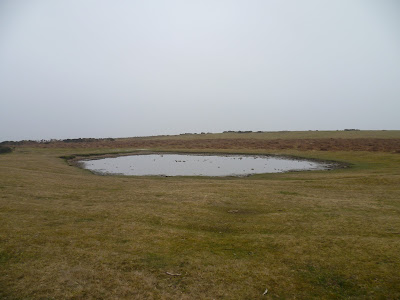 It was a dry March, which is why the water running into the animal water tanks is a mere dribble instead of its usual torrent. Thinking this might be portent of things to come, and having established finally that the pipework is clear, the extra tanks have been placed to collect another 1000 gallons on top of the 750 we usually store. As its current flow rate is about the same a drooling dog it will be a while before we are at capacity but with rain forecast things might speed up. The pic is of the pond on top of the ridge, half its normal size and depth, and usually at this time of year its in flood. Its an enchanted pond, obviously, nothing here is normal, well we have Trolls, Hermits and the original hound of the baskervilles so why should the pond be allowed to get away with mediocrity. The pond allegedly held Black Vaughn a robber baron from the medieval times who, once transformed into a fly by a priest who managed not to go mad like his 12 predecessors whilst they tried to exorcise the spirit of Black Vaughn from the local church, was placed in a silver box and thrown into the pond for eternity. This lasted about five minutes in real time when the locals heard free silver was being lobbed in the pond they dredged it up and flogged it for beer money,. In doing so they released the fly who mutated into a big black dog who roams the hills to this day looking for souls to steal. Yes a real kids story if ever there was one, just the sort of tale that helps little kiddies get through long winter nights. The two big black dogs below are Spotty and Rocky who felt it was their mission in life to get as muddy as possible in as short a time as possible. 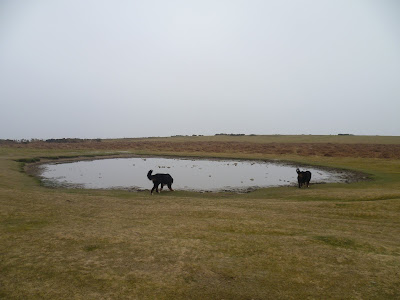