A question of logic 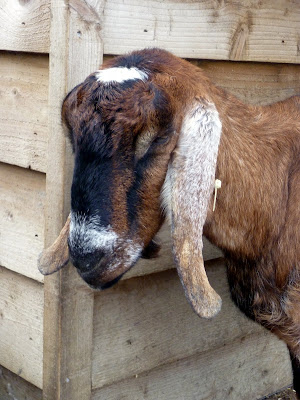 It was the hottest day of the year so far, a gloriously sunny day which was only spoiled by the need to work in an office for most of the day. Red Kite Fostering (see link in margin) is becoming increasingly busy so the time when I reduce my child protection and court work looks sooner rather than later. So Red Kite was sandwiched between smallholding. Hazel's front tyre was persuaded to stay inflated allowing Tracey, my beautiful and oh so patient wife an opportunity to take Spotty for a check up at the vets. Spotty was very enthusiastic about his trip from the ranch, right up until he realised he was at the vets whereupon he bounced around the car park like demented Tigger. On his third circuit he was passed by the vet (actually it was he who passed the vet, often and at high speed) as fit and arranged that his stitches, bounces allowing, would be removed next week.
An outbreak of sanity happened today. I was offered 8 castrated male meat goats for free, and as the freezers are devoid of calories, and being partial to Caribbean food, goat being an intrinsic element, I pondered the pros and cons of the deal. The pros of free curry were far outweighed by the inevitable damage to the garden and me once Tracey found out I had lumbered her with 8 bottle fed maniacs as well as a trainee smallholder to raise. For once it was an offer I could refuse.
Posted by Tony at 22:19