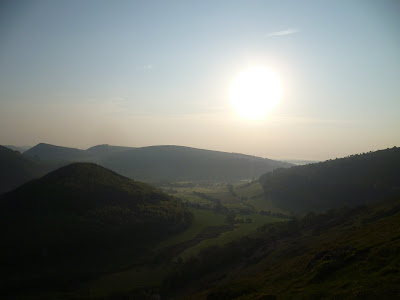 Another early trip up and over the Bonsai Mountain was rewarded by excellent views, if slightly hazy, presumably this is the smog the TV weather keeps telling us about. 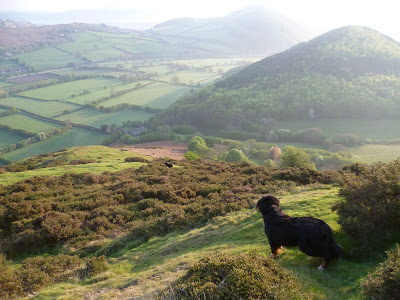 Going early doors also means the Berners don't suffer heatstroke, it has been another scorching hot day, not quite sure how accurate the headlines are claiming its the hottest Easter for 100 years, but it on the warm side here at HQ. 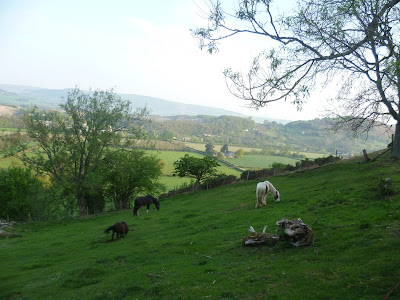 I finally caved in and allowed the ponies up onto the fields where our precious grass has been recovering over winter and slowly growing in the dry spring. There should be enough to keep them going for a couple of days before we have to get them back on to the hayledge.
Another sort of day. We went to visit Grandma, the apprentice smallholder, and while there took advantage of the local retail park. I sort of bought a camera, insofar as I finally decided which one to get, which shop to get it from and when I said oh go on then I'll take it was told they only had the shop display model which they refused to discount so they lost the sale. I sort of bought a CD player, but got confused by the range, specification and finally opted for one that would suit, but as I don't possess an ipod realised I wouldn't need over half of the features and when Tracey my beautiful and oh so patient wife told me the model was wall mounted and I didn't need a wall mounted one did I, I decided not to buy anything. Except a cot, a mattress for same, a large cuddly Bernese Mountain Dog, bedding for cot, night lights, baby clothes, a cuddley Winnie the Pooh, Nappies, Winnie the Pooh sun visor and some kiddies booties. In all, no CD's, no DVD's, electronic goods, toys, or airfix kits. I think life has changed since my last retail therapy.

You do your shopping like mine. It drives my wife crazy but it's cheaper.