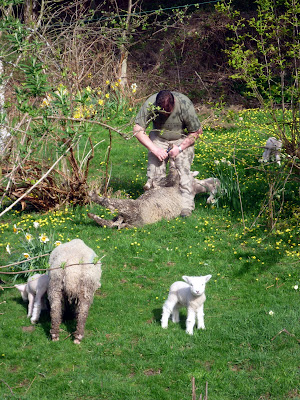 I suppose I would struggle if a fat bloke crept up on me while I was enjoying my tea, grabbed me and flipped me on my back and gave me a pedicure. I might kick out as the assailant tried to trim my pinkies with a razor sharp pair of clippers. Perhaps, as its not the first time its happened in my life I might just remember that whilst this sudden physical intrusion was a bit of a shock, nothing bad ever really happened and once its over my feet felt much better and I could walk properly. But I'm not a sheep, so for whatever reason Springtime, one of our mental Ryelands, proud mum of two thrashed around like a thrashy thing on a thrashy day from Thrash town, utterly determined that the phantom pedicurist should fail in his quest to give her well trimmed foot rot free hooves. 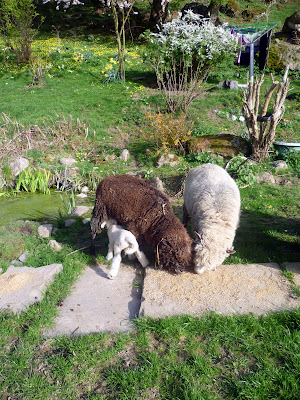 Tracey my beautiful and oh so very patient wife asked if she should get the blue spray. The blue spray is what we use when an animal is cut, badly, its an antiseptic spray. Springtime continued to windmill her feet around, spraying blood, and I fought desperately to get control of the beast and my temper so I could carry on clipping. As the majority of the blood we were looking at was mine I saw no point in fetching the magic blue spray. As I closed the shears Springtime in a real Ninja move substituted her hoof for my left knuckle and I cut a very fetching V shape before noticing the cunning sheep's move. Springy carried on her dying fly rehearsal while I carried on clipping hoping to finish before I bled to death. 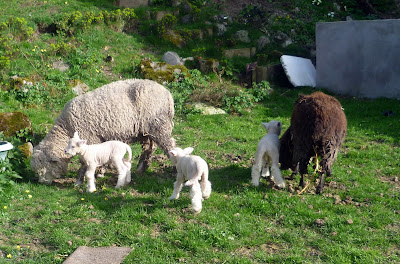 By the time I had rigged up a rudimentary tourniquet from a dog collar Springy had forgotten her "ordeal" and got on with the important things in life, like eating, see above, while I did the Johnny Rambo bit and got my sewing kit out. Who says shepherding is easy!
Posted by Tony at 22:22