Its another saga now 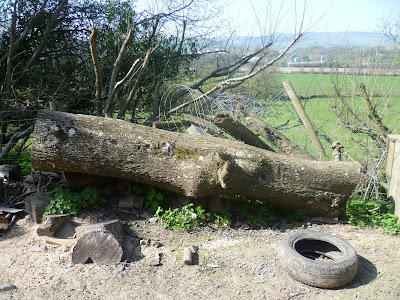 The plan to chop this tree trunk up is still just a plan thanks to the chainsaw repairman failing to live up to his name. I am beginning to think that the farm supplies shop have a cunning plan to sell me a new chainsaw a piece at a time.
When they finally released it from custody after keeping is for some six weeks because the new double overhead flangebothering fluted valve bender needed replacing and the new one was sent by pack tortoise via Antarctica thus adding to the delay caused by the lazy bugger whose job it was to fit it who was instead preoccupied by The Sun crossword, 6 across, overburdened postman, how many letters, well far too many obviously, and dunking his hob nobs rather than getting my chainsaw back in action, it didn't work.
Well it did for one cut, it then jammed. The repairman sneered the sneer of one who knows better when I handed chainsaw back and said it didn't work. He started it, it worked, the sneer got bigger, and then it jammed. Needs a new sprocket mate. The question begged to be asked, well why didn't you fit one when you first had it was not asked. I just wanted the thing fixed. Ready in a week meant two.
The tree trunks days were numbered and yesterday it was its last as a whole. The chainsaw roared into life, a ring was cut from the end, and then the chainsaw jammed. Back in the shop today the sneer returned as did the chainsaw. A quick check over, needs a new bar mate. Get on with it. Like I said, one piece at a time. 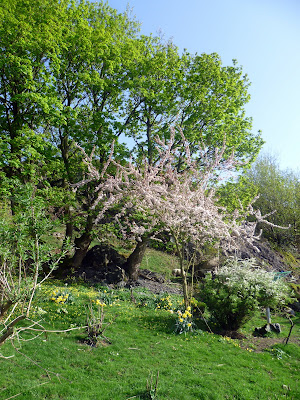 The gardens starting to look rally good, always does this time of year. However since we put the lambs on it I don't think its going to last. So we are enjoying it while we can! 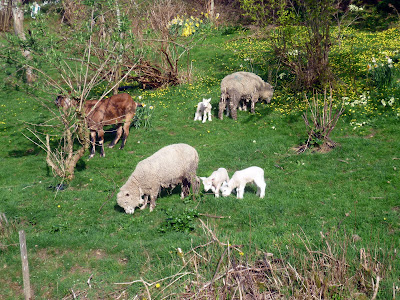