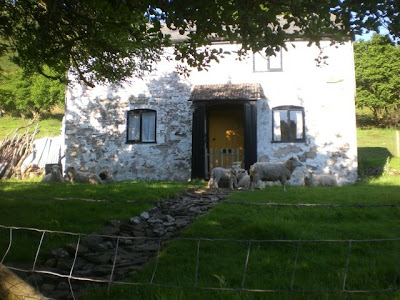 I went to Telford today to collect Tracey, en route I called at Countrywide to buy a couple of bags of feed as Rock HQ had run out of the necessaries to keep beast if not man alive. I ran out of milk five days ago and every time I managed to get myself to the kettle I cursed my poor memory having to forgo a nice cuppa and instead having to suffer an ice cold Guinness after my manly labours. I really didn't forget on purpose but I bet Freud would have something to say on the matter.

Anyway, as we know, in the grand plan the needs of the humans at Rock HQ pale into insignificance compered to the beasts. So running out of pig food, dog food, chicken feed and goat mix at the same time was bordering on a mortal sin.

The ravenous beasts managed to curtail their carnivorous tendencies this morning when I turned out with nothing but water for them. The pigs in particular are wary since their infringement of my personal space, a brief conflict that resulted in me being deficit a chunk from my left calf and introduced the culprit to a Magnum size 10 army boot. Mutually assured destruction has led to a new understanding whereby they gang up one side of the sty door and threaten to rush yours truly if I am too slow at putting their feed out.

The plan, call in and get an emergency supply of feed, enough to tide us over until Rene could be put to service to carry a months supply back.

What actually happened would have had the design engineers of Ford running for their slide rules, calculators and computers to see whether the stresses put on the back axle of Fifi (Fifi is the Focus, don't blame me I only live here) would induce a catastrophic breakdown.

They have broken bags from time to time at Countrywide, these are sold on at half price, usually you are missing a few grammes but in essence you, or rather your beasts get a cheap feed. When I saw that they had broken bags of all but one foodstuff I intended to buy I was unable to resist a bargain. So instead of getting one bag of sugar beet nuts, a bag of corn, a sack of dog food, ditto puppy food and some emergency peanut M and M's for the driver I ended up stuffing into the back of Fifi 5 sacks of sugar beet nuts, two sacks of crushed barley, one bag of coarse goat mix (for goats with tourettes obviously) two sacks of pig finisher nuts, and a bag of giant puppy feed. All these were broken and thus half price. Into this heady mix I chucked in two bags of working dog food, a sack of mixed poultry corn and another sack of giant puppy food with 24 cans of premium dog food for counterbalance. Instead of a maximum of 100kg the poor car was stuffed almost to capacity with 375kg of bagged food alone. So concerned was I that I almost decided against the M and M's, they being the proverbial straw as it were.

The load had an interesting effect on the braking but apart from the vague steering it was almost unnoticeable, well done Mr Ford.

Having got to Telford safely Fifi rested her red hot brakes while I had a cuppa with family and then we came home. I left Fifi complaining about vehicular abuse in the yard but as she was whinging to Rene and a broken wheelbarrow I think it fell on deaf ears. By early evening I had unloaded her massive burden and the suspension seems to have returned to the right height. More or less.

Tracey is being comforted by our dogs who have an uncanny knack of sensing distress. To take her mind off her loss they have decided to give her lots of canine fuss. This has involved sitting on her lap. How she managed to cope with a Golden Retriever, two Bernese Mountain dog adults and two Berner pups on her lap at the same time without needing paramedics was a joy to behold.