The Great To Do Day 5 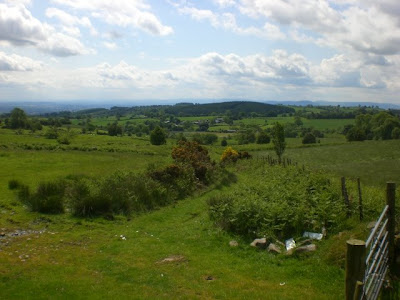 Day five is really where the endurance aspect of this trek came into its own. The day dawned bright and sunny, Sara had rejoined us, fed up at being left out she was determined to complete the last half despite her broken rib. Stuart and I began the morning with the ritual yelling of pain as the boots were forced over ever expanding blisters. The first few steps bedded them in nicely, a popping sensation similar to bubble wrap at times.
In spite of the new company, the glorious weather and the spectacular scenery we retreated into the world of the ipod, for me loud heavy metal dulled the pain of the next step and gave me a beat to walk to.
Today seemed particularly long geographically through Oswestry, Chirk, Trevor, Lanngollen to Langdegla. 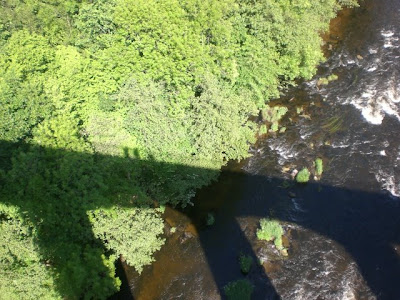 Food was an issue for me again, I managed to get a bacon and egg barm down my neck at three pm at the Aqueduct pub by the aqueduct, again inspirational naming of a pub, only to jettison it an hour later amidst the rocks of Trevor. 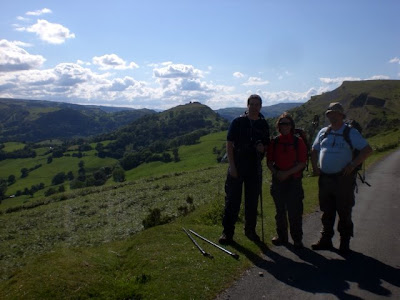 From that point the scenery took on a a new dimension of grandeur, it is probably the only part of the walk I would like to return to and do again. The journey along the panorama route to worlds end is truly spectacular. Especially to a Metallica soundtrack. We had been getting text messages of support and phone calls encouraging us to keep going, for me these were really important today as fatigue and emotion threatened to overwhelm the will to continue. 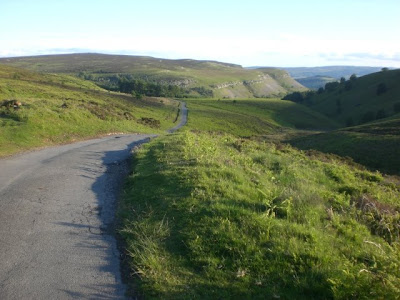 Some how we made it to the aptly named worlds end section, if Offas Dyke had a bottom this was it. A seemingly never ending marshy bogland with board walks to guide the hapless traveller along a conveyor of misery to the forest. My legs at this point were causing me problems. Everyone assumes that downhill sections are easier than uphill, well they might be a bit but downhill caused me the most pain especially in my right thigh. The torture of the forest ended in lush green fields where a sign on a style promised salvation at the local pub, only 200 yards away. This took an age and the final style nearly prevented me getting there but the three pints of beer with the locals eased all the pain. They were a total contrast to the pub in Newcastle, here they were interested in our journey and applauded our efforts. One commented that in fifteen years he has ever known anyone get to Llandegla from Chepstow in less than nine days. This spurred us on, tomorrow we have only 29 miles to complete.
The fact a small mountain range is in the way is a minor issue. We know we will succeed at this point.