Take a horse to water 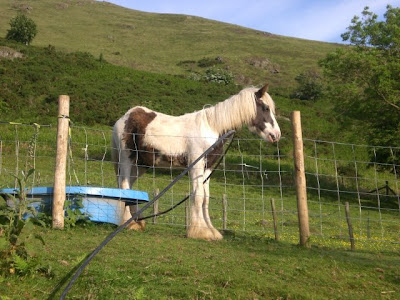 This picture shows you can, Apollo is "helping" fill the plastic boat that doubles as their water trough. Admittedly his help entails knocking the pipe out of the boat forcing yours truly to march back up the hill to put it back before racing back down again to out the other end back on the tap. The too and fro antics could be stopped by the judicious application of a jubilee clip one end and a sharp smack on the nose at the other. Until then the game continues until either the boat fills, Apollo gets bored or I keel over from exhaustion.

Still its all good training for The Great To Do, walking Offas Dyke in 6 days. The news that I am contemplating this trek has had a strange effect on our neighbours. The Oracle when he heard dug deep into his pocket and handed over a well worn fiver as a contribution. I had to promise not to spend it in the first pub I came across along the trail before he let go of it completely.

Mad Keith spotted the Prostate Cancer T shirt I was wearing when I dropped off his chicken and chips tonight. This sparked a fascinating exploration of his medical history which included graphic details of several operations, hugely interesting facts that he got up 8 times in the night to pee and several medical diagrams scratched into the dirt to illustrate certain technical points. During his gleeful descriptions I wondered how my chicken and chips eaten half an hour earlier was managing to remain in place and not add a Technicolour aspect to his anatomical drawings.

By the time I got back to Rock HQ the technohermit had phoned ahead and promised Tracey some money to support the walk as he saw it as ultimately helping him with his little problem. She did look pale when I walked in. It seems Mad Keith had been equally graphic on the phone. I had seen the diagrams and if too scale it was anything but a little problem.
Posted by Tony at 21:43