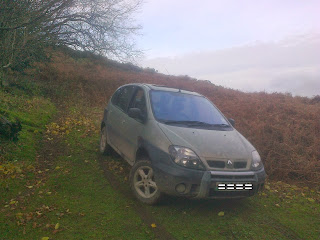 Renatta is still proving useful as a bin lorry and she took me to get the rest of the windfalls from other peoples trees. My thought was that as we had had so much wind over the last 24 hours there would be lots of apples, more than I could manage to carry comfortably. 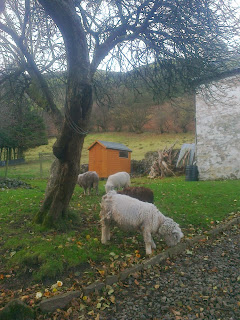 Thoughts did not go so far as to include rampaging Ryelands who fancied fruit for breakfast, so there was considerably less than I had hoped but far more than one person could carry so taking the Rx4 was a good idea. Putting all the surplus apples in a non lidded dustbin was a bad idea, especially as Will.I.Am found them and made a good effort to reach the bottom of the bin. 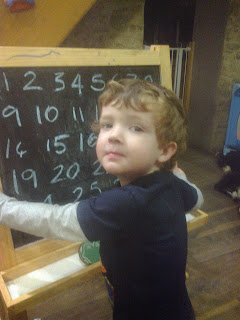 I have been a bit occupied today as being a bloke I am excluded from Christmas shopping on account that I only go to shops I like, such as bike shop, model shop, cd shop and book shop, or if I am clothes shopping I go to the same shop I went to the last time, hope its still a clothes shop and buy a shirt the same as one I have already as its one I like, so my beautiful and oh so patient wife left me too it, as in left me to look after HQ and two infants, while she and supergrandma hit the retail parks. She is so confident in my ability that she is also staying away overnight. So the apprentice and rugrat MkII have taken it in turns to add to my grey hairs but on the whole we have, up to this point in time, all survived.  The apprentice entertained himself with his blackboard and numbers. 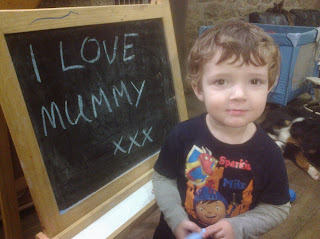 Then he moved on to letters. 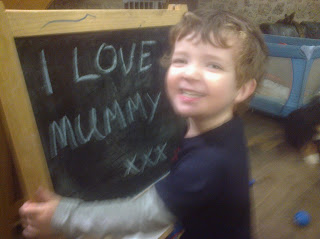 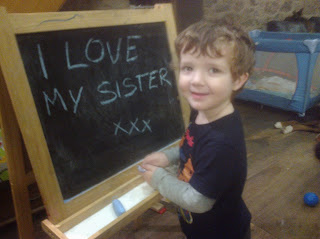 And trying to endear himself to his big sister.
Posted by Tony at 23:01