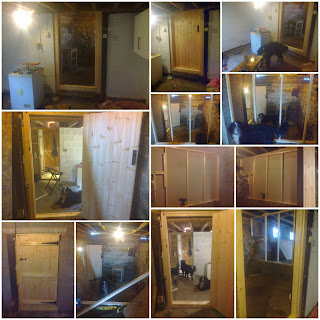 The makeover of the workshop and other spaces continued today. Its been a project long on the jobs list but lack of time, money and talent has meant its just been an idea waiting to get to a drawing board. Now I dont claim to have much of any of the previous requirements (or a drawing board) but I have managed to procure a few hours, and today was supposed to be travel to the far north day, cancelled due to a puncture, long story which will be told late next week, trains permitting, anyway, today, an extra day spent trying not to hurt myself with various sharp or pointy objects.
Behind the door built yesterday lurks The Black Hole, a dark space into which anything gets shoved and never resurfaces. After much effort fueled by sausage sarnies this is now clear of all detritus (large skip outside) and partitioned off from the Berner Annex with a very nice wall. Its only half a wall at the moment, it has yet to be stuffed with insulation, have noggins(?) and another surface added. By night fall Rock HQ was left with another very useful room. Empty at the moment but soon to house Mr Whirlpool and his friends. I have measured the doors and can happily report that they are all wide enough to allow safe passage of large white goods.
Posted by Tony at 23:47