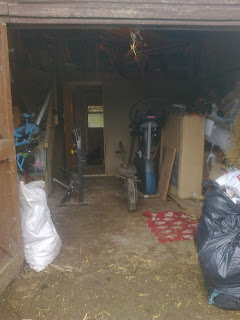 I finally managed to spend some time on the lets add more space to Rock HQ by throwing lots of stuff away and build a utility room at the back of the non-workshop project. As ever things went to plan and Steve the skip forgot that he needed a small lorry and big skip today and as the small lorry was being MOT'd he would have to drop it off tomorrow. Not really useful when it was needed today to make space so the space made could be filled with building materials being dropped off first thing by Steve the builders merchant. 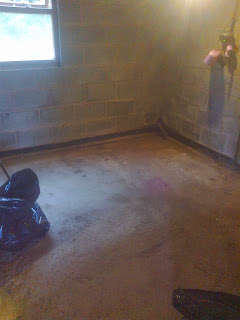 As Steve the builders merchants idea of first thing was 14.15 hrs, the very time I chose to take a break from preparing to build without building materials (but I did manage to get a very large weights bench out through a very small doorway without breaking anything or giving myself a hernia) and have a quick ham sandwich. This is like a normal ham sandwich except you make it in the palm of your hand by placing non buttered slice in left and placing as much ham as you think you can get away with with your right, fold bread around it, take first bite, see lorry reversing to workshop and try and bolt the rest before having to speak to driver (in case you have to share) or having to put sandwich to one side while unloading lorry knowing that sandwich will have been taken by vermin cats before you can get back to it. 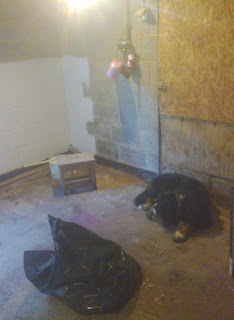 While waiting for building stuff I decided to paint walls of newly designated space which proved to be a good thing as the amount of paint I got on everything including sleeping Bernese called Spotty (very apt) would have been a bother had I got it on the soon to be laid new floor. 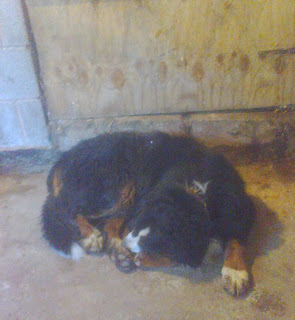 I painted around sleeping dog, as you have to let them lie, and by end of play 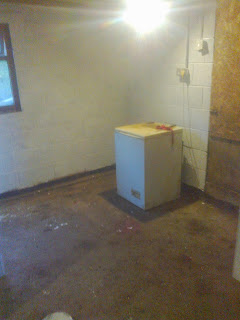 newly designated space looked a thousand times better (oh yes it does) and once I sorted through the various bits dropped off by Steve the totally lacking sense of humour if I smile I might break something builders merchant I found I had a new ceiling, a build it yourself anysizeyoulike door kit (planks) some more planks for a door frame, a new partition wall kit for the annex, lights, insulation material and a new first aid kit. The day did end in a bit of a farce (hurrah back to normal) as Reuben who has all the finesse of a bull in a china shop in a steroid rage, smashed down the temporary door between me, him and the new love in his life, Bonny. While my beautiful and oh so patient wife refereed the mayhem caused by a 60kg love struck dog can create when he gate crashes (literally) the lounge, yours truly set about the temporary door with lots more screws and a power tool. Only when I managed to get the 8ft by 4 ft wood into place and screwed it tight did I remember that I was the wrong side, as in the annex side not the house side and was locked in, in the dark with a head torch with a wonky battery. No amount of shouting could compensate for the noise MBAOSPW was dealing with with excited toddler doing the In the Night Garden dance (you tube it) a rampant Berner and a playing hard to get girly Berner. The only thing for it was to take it down, get the right side, unlock the door and start again.
Note to self.
Always take fully charged battery for power screw driver with you, or a spare, otherwise you might be sat in the dark for a very long time.
Posted by Tony at 23:42