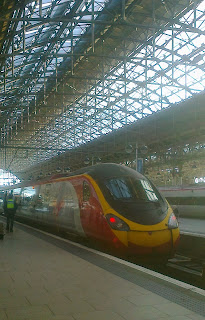 A long time ago (well thats how it seems now) in a galaxy far far away, well a place a long way north east of Rock HQ anyway, I went to a different world on a quest to bring back a lovely 1 previous owner low mileage top of the range Land Rover Discovery TD5. To get there I needed to use the train. Now I have loads of experience of train use, not all of it good, getting off the train in Plymouth when it should have been Portsmouth was one of the classics.
So having to get on a train that I would have to get off and get on another one to get to my final destination was always going to be an anxious affair. Initially the small gods of rail travel were kind, I had a forward facing double seat all to myself, the views were pleasant and the journey comfortable. In fact so good that I mused the possibility of using the train more often.
Plans to take the family on holiday by train were dashed at the change over at Manchester Piccadilly when in the 12 minutes between trains I decided to go and buy a magazine having located the train and platform required to get to Durham. The magazine shop was in view of the platform, and had the 7 tills been operating then the nine people fretting in the queue would have been less concerned about missing their trains. For some inexplicable reason the young man at the front was trying to pay for a 75 pence bottle of water with a cheque book, the ensuing chaos and time wasting manifested in angry exchanges between several commuters one of which shoved cheque boy to one side and demanded service.
The assistant was non plussed at everyone's need for haste and went even slower. My turn came and when we eventually established that I didn't want a carrier bag or one of several chocolate bars on special offer my change was carefully counted into my outstretched palm and I ran back to platform 1 to get the trans Pennine Express. 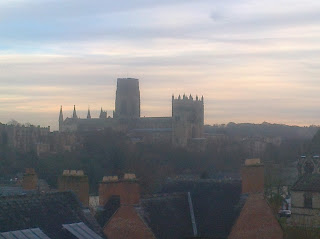 Except it wasn't there.
While I was getting all het up in the newsagents the fat controller of the railway decided that platform 1 was too easy, really we should all be on platform 9 which changed back to platform 3 when we all formed up on 9. That part of the game complete I managed to get into the front carriage to find all seats reserved except for one.
The one next to the nutter.
He started quietly, as we pulled out of the station he cleared his throat several times in quick succession. I busied myself reading my magazine trying to ignore the barking and the smell of dead camels he exuded. As all the seats were reserved I had no avenue to escape. So we sat, one of us in silence, until he barked at me that he effing wanted off the train and he left startling people with his dog impressions.
Nerves steadied with a cuppa (which cost £3.20, when I got off the the train I found I could have a full cooked English with tea and toast for the same amount) I endured the rest of the trip and we pulled into Durham where the sight of its fine cathedral inspired me while seeing my mate Glen and his Berner Buddy on the platform reassured me that all would be well. 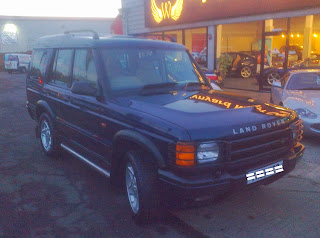 So there we were, at the garage where my new 4x4 was prepped and ready. The nice man who was selling it showed me round, paperwork was sorted, beer tokens exchanged for keys and away we went.
Me following Glen as I had no idea where I was except in the area referred to as The North East. All seemed well, we pulled into Asda where I filled new 4x4 (now called Gerry) with diesel, and again we joined the rush hour traffic.
Out on the dual carriage way, just as I was feeling quite pleased with myself, just as the saxophone solo from Baker Street hits its crescendo, just as I was satisfied that I had more buttons, LCD displays and LED lights than your average star ship commander could shake a stick at, and just as I ordered Scotty to give me warp factor 10 and overtook the worlds biggest articulated lorry there was a loud BANG from the front and a severe lack of engine feeling.
At this point Kirk would be screaming at Scotty for more power to the deflector shields who would be yelling back I canna hold her Capn I've given you all she's got,  but in reality I was praying that the big lorry that I had just overtaken was not going to be too miffed at me cutting back in front of it and stopping.
Fully expecting the lorry to put the rear wheel carrier into the passenger seat I spotted a clear patch on the roadside and rolled to a stop on a flat green bit between bushes as miffed lorry screamed past.
Having survived the non-crash landing I tried to coax the stricken 4x4 back to life to no avail. I was now stuck, Glen who was driving a car that worked properly had gone off into the darkness, I was lost too as I had no idea where I was. To make matters even more fun my mobile phone decided to play silly buggers and would not phone or text.
Eventually I got a message out to Glen, Disco's died, and sent that to the nice man at the garage. As if by magic Glen reappeared behind me having spotted my absence and then my distress signal. As did a nice man in another Discovery who stopped to see if he could help. He had a black box computer thingy which he plugged into Gerry to see what the problem was. Gerry refused to speak to him. The computer said he could not help. So he left. 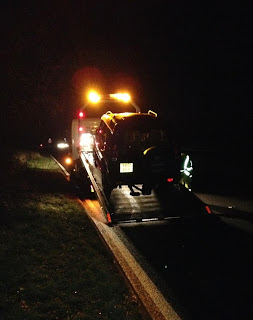 Then along came Rover Tech, dressed like the SAS, they meant business, they would sort Gerry out. First I had to survive the interrogation over fuel. Was I sure that I had put diesel in? This became a boring feature of all conversations relating to Gerry for several hours with all newcomers to the tale.
Except Gerry didn't want to be sorted out so they left and sent a recovery vehicle who's drivers lack of English was only surpassed by his lack of Geography (he drove past us) then his lack of situational awareness, You drive (accompanied by mime) You drive yes? pointing to back of truck now being lowered onto the road. Fully expecting a car to do a Dukes of Hazard stunt up the ramp I explained carefully in words of one syllable or less that if I could drive I would not be sat freezing to death on the side of the road. He nodded sagely than asked if I had a screwdriver, lucky for him I didn't and as I looked for another sharp implement Glen saved his life by lending him one. Gerry was hauled off and he was gone. The nice man phoned and promised the world by way of apology but we settled for a small selection of Pizza's (see yesterdays pics) and I spent the night with Glen's family. 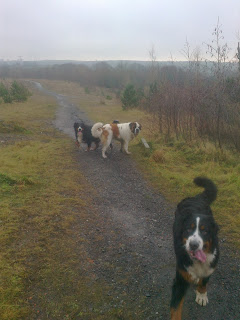 And so began my very short but fulfilling holiday in The North East. We went dog walking. 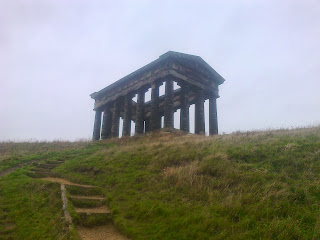 Saw an amazing monument which was impressively hugely pointless 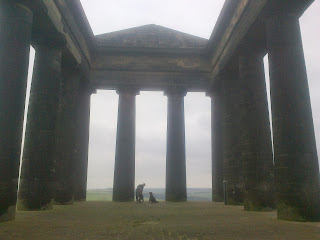 and based on a Greek tourist attraction 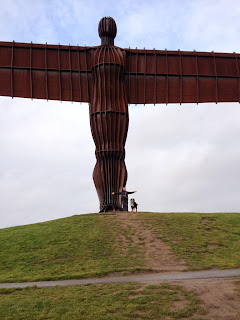 while the Angel of The North was singularly unimpressive, a lot smaller than it looks on the telly and not even a coffee shop nearby. 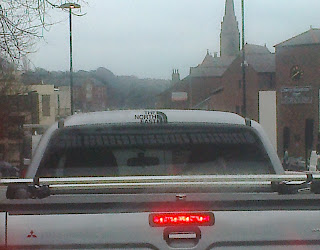 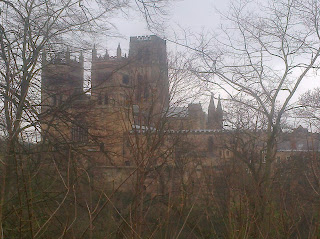 and a Cathedral, in fact my 18 hour holiday confirmed that our planned week sometime soon is a good idea. The nice man then let me know that Gerry was fixed, apparently the trauma of discovering that his owner had sold him to a less than careful heavy metal fan who lived in an area of the world with dirt tracks rather than tarmac was too much for Gerry who was used to radio 3, clean tarmac and an elderly driver. Having Baker Street at full volume and being thrashed into overtaking on a dual carriage way was the final straw and Gerry's brain melted. Or in other words the set of relays that govern the engine control unit had become loose and began short circuiting so they shut down the engine. 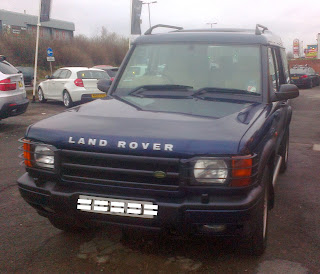 So take two began.
The nice man selling him begged for forgiveness, and got lots when he gave me a slab of money back.
The SAS Rover Tech ninja phoned me to let me know that all would be well and that Gerry was a good un. They filled it with diesel (are you sure?) and I was free to go.
Except Gerry wouldn't start.
Until I swore at him and used a different key.
Then he was keen to go.
Over the next few miles Gerry was subjected to all manner of abuse, the rev limiter tested, speed test, acceleration, stopping, and once I got over the upset caused by mis reading the odometer which read nearly double the mileage (Glen pointed out kindly that I had got it on Km rather than Miles) the two of us were set to head south.
We waved goodbye to Glen and  in the 250 miles we drove in 70-90mph winds, torrential rain, hail, through two floods and avoided two fallen trees, Gerry and I bonded and we think we will get on. He's behaved perfectly all day doing another 125 miles and only once refused to start. The non starting is down to one of the keys which after having its battery changed still refused to operate the locks or ignition so its been flung over the hedge.
Again.
A big thank you to all the The North East who made this tale a happy one.
Posted by Tony at 00:34

Disco Man!! Good luck!!
I would suggest you go and find the key that you threw over the hedge - you will when you see the price of replacing one of these keys!
Good old bus, albeit somewhat juicy but a good workhorse and a big step up from people carriers!!

Nice to see views of Durham: it local railway station when I was a Little Person.

One thing I've learned is that when changing trians, always go straight to the platform and stay there until you see your train come in or you have to change platform. Don't ever go to the shops.