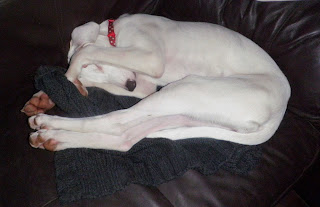 What was already a bad morning (worse than yesterdays start) got considerably more fraught when I happened to glance over to the horizon and movement caught my eye. There in the middle distance and moving with some speed and seemingly with purpose was a very elderly beagle closely followed by a cartoon dog. Now I know the cartoon dog heard my cry of dismay, the ancient either ignored me, or more likely, is now so deaf and confused that he carried on along whatever little pathway his mind was suggesting. Being a keen athlete, ahem, I was able to close the distance between us in less time than I thought, partly driven by the worry that ancient beagle and cartoon dog might be considered sheep worrying types by militia,  but mostly my speed was due to the trouble I knew I would be in if my beautiful and oh so patient wife's canine came to any grief while I was in charge.
Yes today was one of those rare days when I was totally in charge at Rock HQ, MBAOSPW has been rendered incapacitated and is so ill was even unable to direct operations from the sofa. I on the other hand was convinced I could manage and keen to show how well decided that I would do the usual stuff, look after infant and as an extra, do the washing. Having shoved a load in and added the powder direct to the clothing I noted with some sense of dismay that I had in fact loaded the tumble dryer which looks cunningly like a washing machine for some inexplicable reason.
I also climbed into the gallery loft seeking treasure, bit like Indiana Jones, the scene where there are dozens of spiders are on his back, yes that was me today as I searched for a box containing Duplo for little t. I knew it was there somewhere and finally found it, however the most important part of a Duplo Zoo and farm set remains to be located. The animals are missing.
Back to missing animals and my downhill racing to intercept the escaping canines. As I closed in on my quarry the cartoon dog spotted my less than happy demeanour and did the sensible thing and stayed out of harms way. Preston on the other hand was blissfully unaware of the descending wrath and carried on towards the main road. And a house. And bins. He likes bins.
Not wanting to give him a heart attack I very thoughtfully ran alongside him, over took him and then prodded him in a friendly way from the front, the seeing end, his response was to bite the hand that feeds him. He liked the taste so much that he came back for a second go. Preston is 21 years old and going a bit senile, but this was a new one on me. By the time he readied for a third strike he landed back in the land of the here and now and realising his grave mistake rolled over for a tickle and then in an amazing turn of speed raced back to the sanctuary of the cottage while I administered first aid to my left hand. Back at the ranch he apologised by poohing in my boot and is now curled up fast asleep in the straw store.