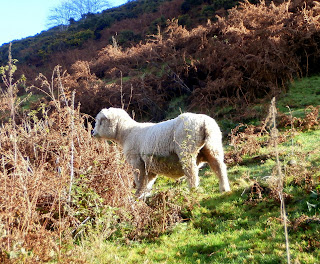 The Ryelands have taken to extreme measures in pursuit of the calorie. Given the poor quality of  the mountain grass and lack of other greenery they are very keen to supplement their diet by any means fair or foul. Most mornings the gauntlet of ravenous woolly backs has to be run, experience has taught that they should be fed first, at a location far enough away from the food store to keep them out of harms way (that's my harm not theirs) but not so far that you get trampled in the excited woolly melee as they try and sample the contents of the bucket. The contents of the bucket also need to be enough to keep the slavering beasts chomping while yours truly gets around the rest of the critters unhindered. Several of the little flockers have spotted and exploited an opportunity, rushing the feed store while the breakfast is laid out for the more well mannered members of the flock. A lonely pathetic triever tried to hold them off but she was overwhelmed by numbers and soon the assortment of feedstuffs was rapidly reducing. In wades yours truly grabbing belligerent sheep and evicting them, except taking hold of one was a tad on the painful side prompting much Celtic language, and even though this skirmish took place at 06.45, at 22.09 my right hand still smarts.
The Ryelands are using terror weapons. Each of the three insurgents had, and I would say deliberately, rolled, walked in, slept on, whatever, but the upshot was, each naughty sheep had a liberal coating of stinging nettles in their fleece. This delayed the eviction by .5 of a second but a line has now been crossed in the breakfast wars. I will have my revenge, in this life or the next!