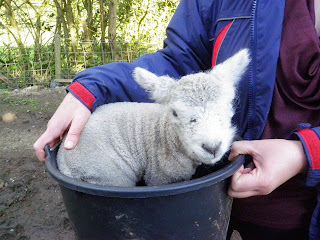 This pic was taken yesterday when we finally confirmed that imagination was not running riot, we had in fact got one extra lamb, here in the bucket. So sometime over the last week Petal delivered this bonny little girl all by herself. Once we gave her a quick check over and wiped her bum (the things you have to do as a smallholder, wiping sour cheese smelling lumps of yellow pooh off a lamb just after breakfast, barf!) she hopped skipped and jumped off after the others.
So now including the two, Izzy and Jason who are growing on the helipad, we have 9 lambs. Until today, when for reasons far too complex to explain but involve Extra, for that is her name, becoming separated from Petal on the Bonsai Mountain and rescued by my beautiful and oh so patient wife and little t.
Extra then spent a sunny afternoon on the helipad/garden with Jason and Izzy. Enter Spotty a very bouncy berner who thought the garden had broken out in squeaky toys and tried to play, he was quickly reminded that sheep are not play things no matter what size they are and as the expletives died down and the dust settled with him saying sorry and me getting on with not amputating my fingers as I sawed some more bits for the aviary, one of our gang was missing. Extra was no where to be seen and stayed this way for over four hours. Theories ranged from alien abduction to fox snacks, several searches of the perimeter drew a blank, fox seemed more likely, small defenceless lamb alone on mountain. Not much hope. Posted as M.I.A. our first M.I.A in a long time.
Just before dark I set off along the track on a just in case mission and halfway along happened on Petal, who had obviously appeared as if by magic, Roxy (still living, life 9) and between the two was little Extra. Much relief. Still no mercy to foxes should they show up expecting an apology.
Posted by Tony at 23:29