Not meant to happen 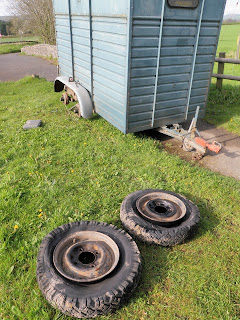 Trixie was rescued from the roadside today in an amazingly efficient wheel/tyre change exercise that only took me and hour and half, which included 20 miles driving and twenty minutes waiting for the very nice man to stop laughing at the state of the shredded tyres and fit two nice shiny new ones. 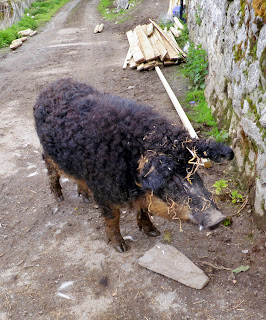 Once Trixie was back at the ranch we decided to make the best of the weather by going out around the bonsai mountain, me with my load in the kiddy carrier trying to get some last minute exercise before the reality of the BBMC hits next weekend. Thor the boar has figured a way out of maximum security and took it on himself to follow. His fixation on horses continues and when we were nearly a mile away with pig still snuffling around Chesters feet my beautiful and oh so patient wife turned home and managed to shut pig in stable and rejoin little t and I on our trek. 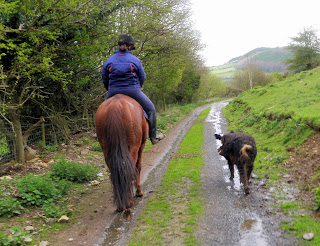 The last thing we needed was a pig finding the 500 acres of wilderness more appealing than his stall at HQ. 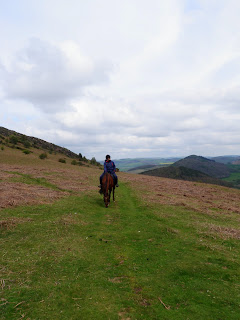 So while we were taking in the views and thinking ourselves lucky that our horse besotted porker was kicking his trotters at home we were joined by a very handsome Welsh Cobb who came cantering up sheepskull lane. 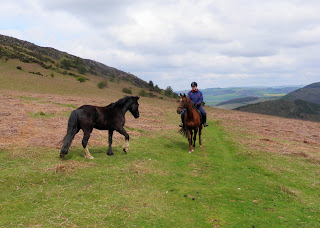 Not sure how William had made it here (the Pgoor probably) or how he knew to meet us, but Chester took it in his stride and after greeting each other they welcomed 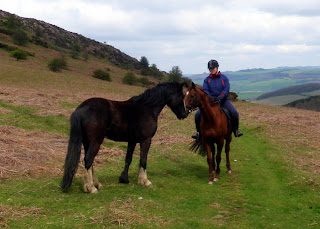 an exceptionally handsome gypsy cob, Apollo, who again was not where he should be and keen on joining us on our trek. 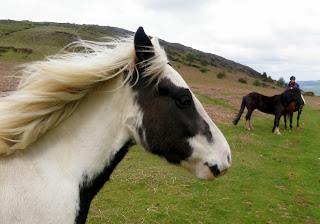 This was not meant to happen and as the boys cantered around trying to entice Chester into poor behaviour we decided to cut our losses and head back to base. The rest of the day got back on track once we fetched the boys back, erected a higher fence around Thor and divided the runway into two to stop the boys picking on Hetty. Somehow we found time to have a coffee with some friends who popped over and more work got done on the aviary.
Posted by Tony at 22:44

Thor is something and a half. I have read that often single pigs will bond with horses, but thor has plenty of company. And he wasn't raised with horses, or ponies so I guess he is just odd. This might be a stupid question, but have you thought of maybe leash training him to take out hikes on the mountains ? I know people take everything from dogs to lama's, ponies and horses to even goats like your Geisha to go hiking. So maybe the pig would enjoy it and he won't be as bored and won't try to get out as much. Acourse this might lead to an accidental feral population of manglizata's on miltary land and they would be p*ssed. Though I am surprised you don't have an a population already of feral pigs.
Kit

PS I did find this video on pack goats, which I think at heart was what Geisha was. Apparently Nubians make good pack goats. I was wondering if you have ever heard of hikers doing this before. Maybe one of your new ones would be interested as well if they ever want to follow you again up the mountain.
http://www.youtube.com/watch?v=_dvuWYZqBis
Kit

PS I did find this video on pack goats, which I think at heart was what Geisha was. Apparently Nubians make good pack goats. I was wondering if you have ever heard of hikers doing this before. Maybe one of your new ones would be interested as well if they ever want to follow you again up the mountain.
http://www.youtube.com/watch?v=_dvuWYZqBis
Kit