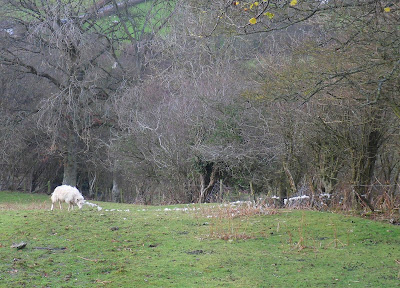 As I dont have a proper job, according to the Technohermit anyway, I was able to take a trip round the Bonsai Mountain after slaving at the PC for several hours. The midday walkabout served many purpose, firstly it put the next few paragraphs of a report together, it burnt a few excess calories (it is afterall 1sr December so mince pies are aplenty) it exercised the Dolyhir clan and meant that this poor sheep was set free. 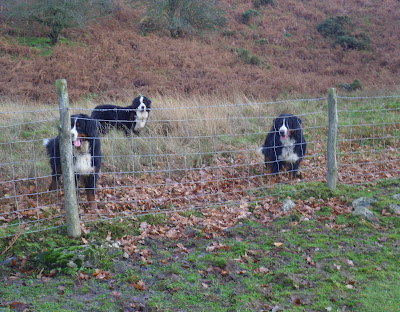 The poor wooly back was stuck fast in a loose strand of barbed wire. When I first spotted it all I could see was a strand of wire coated wool waving about erratically. It looked like it was waving in the brreze, but as there was none it caught my interest and so I stayed to watch what was going on. The wooly back clambered out of the ditch along the hedge, saw me and the clan and did what any self respecting sheep would do when faced with a large group of predators, it went mental.
The Bernese sat and watched with mild interest as yours truly clambered over intact barbed wire fence and approached striken beast who was now weilding the unwanted attachment like a cheesewire threatening to sever my legs just below the knees. Hence no pictures as for once yours truly anticipated potential injury and used both hands to wrestle panic striken animal to submission while at the same time fending off barbed wire. Eventually, more by luck than anything else, sheep became unfastened and ran away without so much as a thankyou while I was left in a similar predicament as the one I found the sheep in. Thick lined waterproof trousers saved the day, although the waterproofing is now a bit compromised, and the savage wire was rolled up and tucked behind a post. The entertainment ended, having sucessfully negotiated the fence back onto the Bonsai Mountain, the Berners headed for home with me in tow wondering how many other people get such an exciting lunch break.
Posted by Tony at 22:20

I get the 'proper job' comment frequently: often from people who I'm investing time in for them to develop their skills...