Was it all worth it 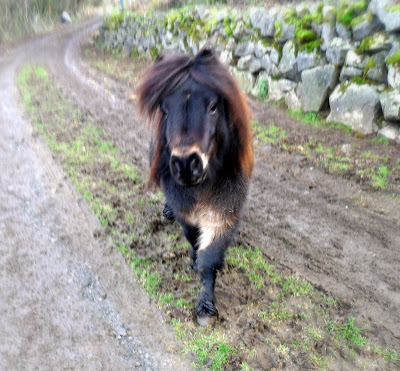 Yesterdays trials involving George(80 half barrow loads of concrete, a full load was too heavy to get up the slope of the gateway) a runaway cow and two missing Shitlands (missing as in the sense of not where they should be, I knew where they shouldn't be, so did they, but as I was mixing a new surface for the Corral OK I left them to work on their apology) left yours truly feeling a tad tuckered out. It took a while to coax me outside but the poor starving critters couldn't manage without me so after three bracing cups of tea I put all thoughts of selling the smallholding out of my mind, manned up and got on with it. First encounter in the lane was with the Pocket Rocket who sort of said sorry and went back to where he should be without a murmur. The concrete had gone off sufficiently to walk on and has for all time preserved the journey of a Bernese Mountain Dog eager to get back to her owners side after doing a number two on the Bonsai Mountain. Bliss had to jump two fences and crawl under the wire of a third to achieve this pattern in the concrete and as it happened when I had technically finished with almost everything put away there was little I could do to remedy the alterations to the desired finish. Considering all the critters that live here it is in fact a minor miracle that along the length of a 36 metre stretch of concrete we only have Bliss's effort at the end.
Hetty was caught mid jump in a brave effort to get into the militias field so was led by the magic of the blue bucket to try out the new facilities. 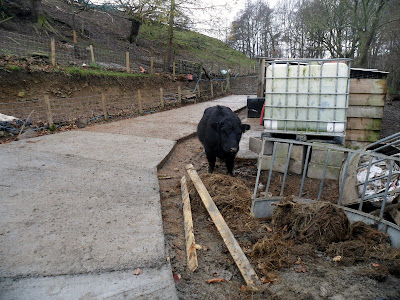 As can be seen when faced with the choice of standing on lovely clean dry concrete Hetty opts to stand in the remaining mud (soon to be dug out as a drain) Not only does she shun my concrete she does for reasons only known to herself, start to eat the rotting hayledge that yesterday was beneath a ton of stone, dug out by yours truly as I was concerned that its biodegrading might cause instability in the foundation of the concrete. It cant be that she is hungry having eating three breakfasts and around 2 pound of carrots. 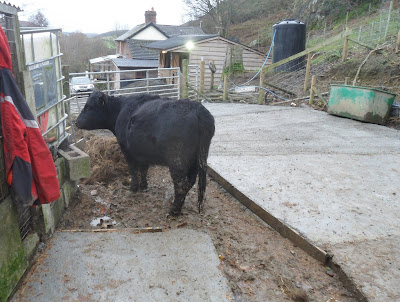 Begs the question was it all worth it. Well its not meant for cows so yes it was. And watching Thor thunder up and down the runway certainly raised a smile.
Posted by Tony at 21:05