Not the best news 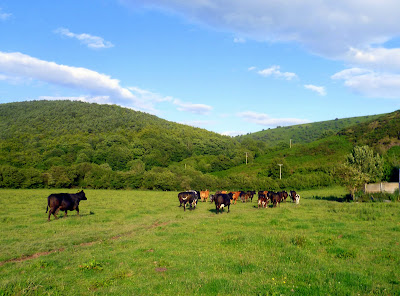 Cast your mind back to June, sunny days, yes they were, blue skies, really they were, and a mad miniature cow with an amazing ability to jump fences.Hetty our mid legged Dexter followed the call of nature and overwhelmed with the desire to procreate she abandoned a life of chastity at Rock HQ and took a giant leap forward (several) into the lands of the militia to find true love, if not then a quickie behind the cowshed.
Thankfully we rescued her and saved her from deflowerment, and with the help of The Oracle separated the lovesick Hetty from the lustful advances of a big brute of a Belgian Blue Bull. Life returned to normal, Hetty looked out cross the lands of the militia with longing, but refrained from venturing into the unknown. She did call him, but he had long gone. No flowers, no letters, nothing. Hetty put this down to experience and moved on. Or so we thought.
Two days ago Hetty was behaving very oddly, more so than normal (having conquered her fear of concrete and adorning her cowsonage with garden furniture) so oddly that it looked like she was about to give birth. Impossible.
Our favourite vet called today and gave several animals an MOT. One of his tasks was to check what was wrong with our Hetty. Now I have always had a lot of respect for Paul the vet, but the way he managed to insert his left arm past his elbow up Hetty's back passage while she walked around her shelter was modern art. Hetty was surprisingly relaxed about this unexpected intrusion and once over the initial shock settled down to eat breakfast while Paul did his vet thing. Verdict. Six months pregnant. Right on the money with that announcement it being the 23rd of June that Hetty, as we now know, allowed the Belgian Brute to have his wicked way.
So now we have choices. Abort the calf, or let her carry a calf that she is not likely to be able to give birth to and risk her life, and the calf's, with a cesarean section. We are sleeping on it.
More bad news, Paul had a look at Bliss, the Berner who has grown in size in the right places, got fussy over food, built a nest, produced milk and chased the cats. Shes not pregnant, shes faking it. 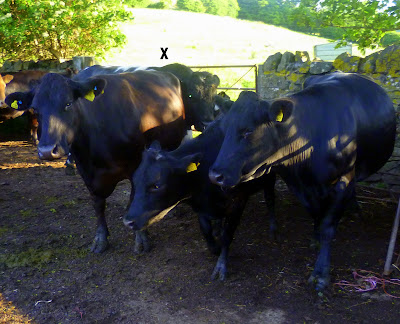 Hetty is the small one in the middle, the Belgian Brute is lurking behind.

These Bulls!! No thought for the woman, just had his wicked way and then off to the Abattoir without a backward glance!
No chance of doing the decent thing here I'm afraid. Abort it asap and put it down to experience. Have had sheep, cattle and the better half trying to produce offspring that are just not going to come out the normal route and it's no fun for anyone concerned.
Cheers

Yes, sadly I'd abort so she lives to birth another (smaller)calf :(

irresponsible animal husbandry. If you kept her properly it would not have happened.

Thats a bit of a crap comment - she has a far superior life to what most cows have - if thats irresponsible lets have more of it.

Awful decision to make but I think you know what to do.

These dam bernese, mine have had more phantoms that turkey at Christmas - I think the little monkeys know exactly what they are doing! But you can't fight mother nature, I'm sure her time will come.

There's always one person ready to stick the boot in, and they're usually anonymous as well. Funny that.

Hope the year picks up for you all after this slightly rotten start...

Yes mate, still after 4 years the first crap comment is worthy of note:)